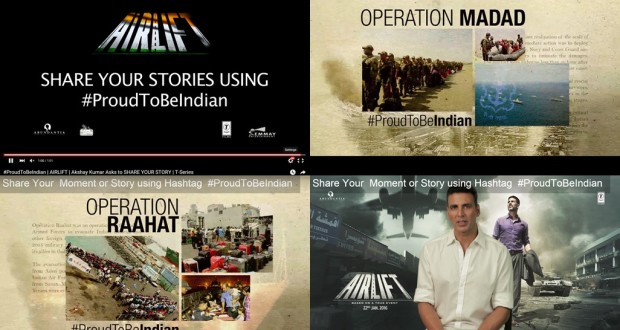 It was a busy time last month for Akshay Kumar as he prepared for the release of his new film, the edge-of-the-seat thriller Airlift, on 22nd January. 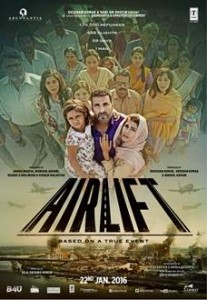 Airlift tells the story of the largest human evacuation in history, during which over 170,000 Indians were airlifted out of Kuwait in 488 Air India flights over 59 days after Saddam Hussein invaded the country in 1990. The story was almost forgotten, until the film was made to remind everyone of the astonishing feat. Akshay Kumar plays Kuwait-based Indian businessperson Ranjit Katyal, the mastermind of the rescue operation.

Proud to be Indian
Inspired by this humanitarian gesture, Akshay Kumar launched a “proud to be Indian” campaign. The star called on fellow Indians to share their stories and moments that made them feel #PROUDTOBEANINDIAN. Kumar explained, “Every day thousands of people help others, stand for the rights of people, and also die for the safety of others without caring about their life, wellbeing or greed. You can pick up history textbooks to see that the people of India have always cared in, for example:
•Operation Madad, 2004, when thousands of people were airlifted out of Tsunami affected areas;
•Operation Sukoon, 2006, in Lebanon;
•Operation Raahat, 2015, when Indian Force rescued thousands of people in Yemen.”
He then tweeted: “India truly cares for her people, Tell me your stories using #ProudToBeIndian”

Protecting refugees in Jordan
Akshay Kumar went on to tweet his respect to Her Majesty Queen Rania Al Abdullah and Jordan on their determined efforts to protect refugees at a time when the world is once again experiencing a major refugee crisis. He pointed out that Jordan played a crucial role in giving Indian civilians refuge during the 1990 Gulf War which prompted the airlift portrayed in the film. 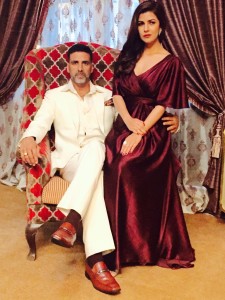 Meeting some of the real-life heroes
Akshay Kumar, co-star Nimrat Kaur and Airlift’s director Raja Krishna Menon visited the new Delhi office of India’s national airline Air India, which played a crucial role in the original airlift. The Airlift visitors posed with an “Art Collection” book of Air India, while the airline’s CMD Ashwani Lohani presented a memento of an Air India plane to the stars.

Release is here
All the excitement was justified, when Airlift opened. The film gave Akshay Kumar his highest earning opening week, grossing approximately $3.4 million internationally in first week of release. The record was particularly impressive, as this action drama is not the usual style of an Indian film, which favours family dramas, rom-coms and romance. The success is thought to have come partly from the effusive reviews the film has received and also through word of mouth as those who have seen the film tell their friends about it.

Speaking about the success of the film internationally, Mr Sunil Shah, Head of Film Division at B4U, said, “The success of Airlift internationally clearly conveys a trajectory in the changes in film consumption – the international audience for cinema is expanding and becoming more accepting of other genres – and as a company we are delighted to be at the forefront of this emerging trend.”