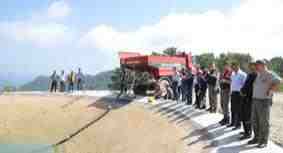 Volunteers and emergency services workers wait at the top of the reservoir while the water is pumped out.

Rayhan Ahmed (22), from Jubilee Street in Stepney, the only son in his family, has drowned while on holiday with friends in the Alanya district of Turkey.

The friends had taken a trip into the forest and were near the village of Gözüküçükl when they came upon a small, man made reservoir which held a water supply to be used in case of fire and was six metres deep.

Anika Begum, Rayhan’s girlfriend, confirmed that he entered the pool, asking friends to take a photo of him in the water. What happened next is unclear, but it seems that Rayhan got into difficulties – although friends may have thought he was joking at first. It is thought that Anika tried to save him but was unable to do so.

It is thought that local people heard screams and the fire brigade and emergency medical assistance were summonsed. It took the fire brigade, assisted by the Forest Management Authority, nearly two hours to pump the water out of the bowl shaped reservoir. As a last, small depth of water was left on top of a deep layer of silt at the bottom of the reservoir, Rayhan’s glasses could be seen, floating on top of the silt.

The fire brigade lowered a ladder down the side of the reservoir, but it did not quite reach to the bottom. A volunteer then abseiled down the side of the reservoir and was able to retrieve the body.  The volunteer and the body were then winched back up to the surface. An emergency ambulance took Rayhan’s body to the local municipal morgue, where an autopsy was to be conducted.

It has been reported that entry to the reservoir was forbidden to local residents and tourists alike by the authorities which manage the forest. There were signs up near the reservoir which appear to say entry is forbidden, but these appear to be only in the Turkish language.  The local police have launched an investigation.