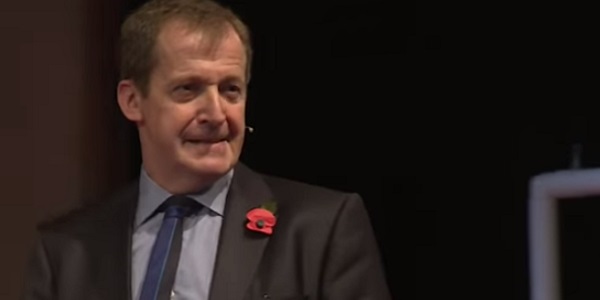 IS ALASTAIR CAMPBELL angling for a book deal? It’s hard to find a more plausible explanation of his behaviour on Sunday night.

Campbell made his name out of being Tony Blair’s right hand man in the Labour Party, and he’s struggled to find a purpose in life since those heady days. In the topsy turvey of the sudden Euro-elections, he managed to get a place on the BBC’s election results programme – where he did three very strange things.

First, he accused the Brexit Party of being funded by Russia, without presenting any evidence to support this assertion.

Second, when offered the opportunity to apologise for this accusation he repeated it, hinting that it was a bit of a joke but was also common knowledge.

Campbell knows media law. That he was prepared to say something which is clearly slanderous (twice!) shows just how high his own opinion of himself is: so high it’s above the law.

The third thing Campbell did was to admit – no, not admit: boast – that he had voted for the Liberal Democrats at the election on the results of which he was commenting. He said he had done this in order to try to persuade the Labour Party to “do the right thing” – without explaining how he thought the cause and effect of that one would work.

Campbell knows the Labour Party rule book. He knows that stating publicly that you have supported a candidate standing against an official Labour Party candidate leads to automatic expulsion from the Party. It’s not a controversial practice: political parties do not admit supporters of other parties into their ranks and do not give them the rights, such as deciding on policies and candidates, that members have.

The Labour Party knows the Labour Party rule book and have duly removed Campbell from membership. It’s an act which most Labour Party members will welcome: party officials have been rather lax on operating the automatic exclusion rule in some past cases where sitting MPs and the like have spoken out against party policy and candidates in the past.

Campbell has not responded to the news of his expulsion with surprise – after all, he courted the expulsion with his very clear comments. Instead, he has underlined his high opinion of himself by coming out fighting – announcing that he is going to appeal.

Campbell know the Labour Party rule book. He knows very well that the rights of appeal against automatic exclusion are very limited. Campbell cannot contest the facts or claim mistaken identity over a statement he made on live TV. He knows already that an appeal will not succeed.

There are reports that Campbell is contrasting his speedy exclusion from the Party with the length of time it has taken the Labour Party to deal with allegations of anti-semitism made against a small number of rank and file members.

Campbell knows that Labour Party rule book. He knows that he is being removed from the Party under the auto-exclusion rules which remove from the Labour Party, necessarily quickly, supporters of other parties. He knows that allegations of anti-semitism have to go through a process where evidence is shared and hearings are held.

Campbell knows what he is doing. What he is up to is, in words which are only a little more Peter Capaldi than Alastair Campbell, is a “mind fuck”. Campbell is telling us not how the world is, but how it isn’t – and how he would like it to be.

He is testing the ground, in a movement – spearheaded by Chuka “who?” Umunna – to see how the Labour rebels can set up a new centre party. He’s got form on cross-party political collusion: coalition, rather than political principle, to win power at any price is what Blair’s advance was based on. He’s got encouragement for this new role he’s playing: there’s little doubt Blair is waiting in the wings, time on his hands, ready to charge on to the stage to “rescue” (or “ruin”, as supporters of the current leadership would have it) the Labour Party. And he may well get a book deal.

•Read more about it:
Blair? He’s having a laugh!
Corbyn under attack: must be an election due