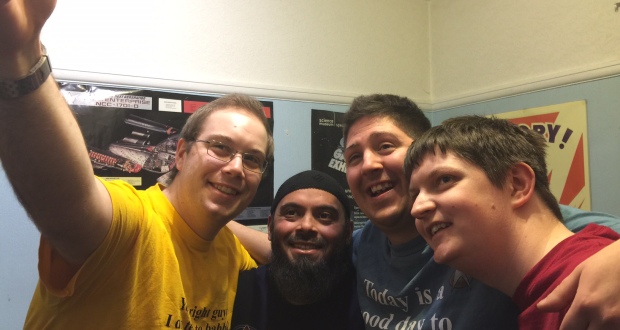 Edmad (second from left) and the team: beam me up, Emdad?

An evening of Star Trek with the Engage Podcast team

The Engage Podcast was started in mid-January of 2011 and since then the team has produced and recorded a total of 39 episodes (excluding the Promo). Last June the team was invited to do a Fan Panel at Destination Star Trek 3.

The team is comprised of three members.

•Simon Cordell – Executive Producer and Host for the podcast has been a fan of the franchise for over 15 years and has accumulated a wide and varied knowledge of the franchise as a whole. He knows more random bits of trivia than is humanly possible! [Surely not as many as you, Emdad – Ed.]

•Then there’s Jamie Marks – Producer and Host who has been on an “adventure” of his own over the past few years. Jamie finds coming up with ideas has become easier. This is due to his expanding knowledge gained from reading extra material on the franchise in books, magazines and some comics.

•Philip Tuck – Producer and Host was drawn to the franchise by the latest films, which he does not stop going on about. Unfortunately, he keeps comparing anything else he sees to it! However, there is some hope for him yet, as he has started watching and enjoying Star Trek: The Next Generation. His opinions on many topics and episodes have led to his own section of the show, and after a lot of discussion it was named “Strange New Worlds”. This covers the topics and questions new fans might have about the series.

With all this knowledge on offer it was only appropriate that we popped over to tap in.

1.  Just how big is the Star Trek franchise?
The franchise is more than just big, it’s massive… as it is stretched over two universes!
The first is what is now considered to be the “Prime Universe”. This is the universe we’ve had from 1966 (Star Trek: The Original Series) right through to 2005 (Star Trek: Enterprise). That’s including the other four series and ten feature films – which in themselves are broken up into six Star Trek: The Original Series films and four Star Trek: The Next Generation films.
The second is the universe produced by JJ Abrams, which I’ve nicknamed the “Abramverse”. This universe has only been going for six years, and is (currently) made up of two films. The first is Star Trek, released back in 2009, and the second is Star Trek Into Darkness, released in 2013. This smaller scale makes it a good place to start for new fans of the franchise… before they venture into the Prime Universe.
Some old school fans consider the Prime Universe (and the shows and films within it) to be “pure” Star Trek. The Abramsverse doesn’t deal with what I like to call “the three ‘M’s” (morals, messages and meanings).  What I mean is that there’s (currently) no way for the Abramsverse to comment on contemporary issues… as there is no series (at the moment) to do that!

2.  Who are your favourite characters and why?
Favourite characters (and role models) are Captain Picard and Command Riker (both in Star Trek: The Next Generation). We’ve chosen Captain Jean-Luc Picard because he instils all the good qualities in the franchise. He’s a strong role model who’s honest, kind, fair, and objective…but most important of all has a moral compass.
Another choice is Command William Riker as he is just an incredibly great guy! As he loves playing jazz on his trombone, he’s liked by everyone and is like a big brother… as he can give you advice on the ladies!

4.  Why did Gene Roddenberry create the transporter?
It was an easier (and cheaper) way of getting the Enterprise crew members onto a planet’s surface, rather than landing the ship on the planet. That would waste time. Transporting them down would mean that they could concentrate more on telling the story.

6. Why did TV bosses at first reject Leonard Nimoy’s Spock character?
The bosses at NBC thought that the Vulcan First Officer Spock would appear too much like the devil and worried that it would “would scare the sh*t out of every kid in America” – forcing the publicity shots to be altered.

7a.Why did Roddenberry want the Enterprise to fly upside down?
Good question, Emdad – a question we don’t know the answer to… but we would speculate that it was done that way… so that the model wasn’t broken due to the strain. There’s also a possibility that it was done to make it easier to film. It is well known that instead of moving the model for filming, they move the camera around the model instead – which is simple but effective!

7b.Where did the Original Series Enterprise get its design from?
The original design came from the show’s designer (Matt Jefferies) and the series creator Gene Roddenberry. As Science Fiction starships at the time were either flying saucers or rockets, to make Star Trek stand out they decided to combine the two… creating the design you see today!

8.  Apart from the obvious, are there perks for fans?
Being a “Trekkie” is great! You get to join a fantastic community of people, who are friendly and outgoing… Everyone respects each other’s opinions (even though they may disagree). The Kirk/Picard debate is a prime example of that at play!
We also believe that people in general have enjoyed the perks of Star Trek (and science fiction in general). Many of the technological advances we appreciate have their origins from people inspired by what they’ve seen on a science fiction show like Star Trek!!!

9.  Where did the line “to boldly go where no man has gone before” originate from?
It was originally taken from a White House booklet (at the height of the Cold War and space race) on space issued after the Sputnik flight in 1957. The writer of the second pilot (“Where No Man Has Gone Before”) of The Original Series used the quotation. After several episodes, and much deliberation (and revisions) by Gene Roddenberry and the show’s producers, they decided upon the infamous words.

10.  Why did Spock commonly resort to the Vulcan Nerve Pinch?
It was conceived of by Leonard Nimoy so that Spock could overpower adversaries without resorting to violence. The Vulcan Salute is another one of Leonard Nimoy’s suggestions to build an identity for the Vulcan species – so that you could differentiate the Vulcan people from a different race.

12.  Why do the Star Trek: The Original Series Klingons look different from the Star Trek: The Motion Picture Klingons, seen in later series and films?
The real reason that the Klingons changed between is the Star Trek: The Original Series and the later television series and films is because they had a better makeup budget. But the show itself has dealt with the issue coming up with a couple of canon reasons for the change.
•The first comes from Star Trek: Deep Space Nine when the crew returned to the 23rd century in the episode “Trials and Tribble-ations”. Where Worf (a Klingon) acknowledges the difference in appearance, he offers no explanation. He just says, “We do not discuss it with outsiders.”
•The second explanation comes from Star Trek: Enterprise, and a two-part storyline (episodes “Affliction” and “Divergence”) that aired in February 2005.  As the Klingons attempt to replicate Terran (human) experiments to create augmented soldiers, the Klingon scientists used genetic material from human test subjects on their own people. This resulted in a viral pandemic which caused Klingons to develop human-like physical characteristics. Doctor Phlox (Enterprise’s Doctor) manages to formulate a cure for the virus… but the physical alterations remained in the populace and were inherited by their offspring. Phlox indicated that “someday” the physical alterations could be reversed.

13.  What was unique about Khan’s men in Star Trek II: The Wrath of Khan?
You’ve lost me Emdad. I’ve seen that film so many times… but I didn’t know there was anything special to do with Khan’s men.  (They were all Chippendale bouncers).

14.  Were Borg robots initially meant to be Borg bugs?
Interesting, Emdad – I didn’t know that… but I’ve got to point out to you that the Borg aren’t robots. They are actually cyborgs. They are in fact humans who have been augmented with cybernetic enhancements. But it wouldn’t surprise me, as the Borg we go on to see have a “hive mind” much like an insect colony, backing up your original question. A good bit of research, Emdad!

15.  I‘ve read somewhere that during the filming of Star Trek (2009) Zachary Quinto couldn’t manage to properly do the Vulcan salute?
Yes, after the release of Star Trek 2009 the news came out that Zachary Quinto couldn’t hold his finger together for his scene with Leonard Nimoy (“Prime” Spock). So after exhaustive attempts to do it naturally, JJ Abrams had to eventually glue his fingers together in order to get the scene shot.

16.  I’ve heard the Gene Roddenberry was a cop?
That’s right, Gene Roddenberry was a police officer for the Los Angeles Police Department. While he was doing that he was also a part-time freelance scriptwriter. From his daytime job he witnessed the darker sides to humanity. This got him thinking about doing a show set in the future (at the height of the space race and Cold War) where all the world’s problems were solved and we lived in a utopian society – a world without war, without hunger, without disease and without poverty. This idea grew into the Star Trek we know and love!

17.  Who is Lucy, or Lucille Ball to use her full name?
Good question I don’t know the answer to… as I’ve never heard of her name relating to Star Trek before!

18. I understand that Eddie Murphy wanted a starring role in Star Trek IV: The Voyage Home.
Emdad, this is the first I’ve heard of it! (Yes, and he has regretted it since.)

20.  What is the story about Patrick Stewart’s confidence in Star Trek: The Next Generation?
When Star Trek: The Next Generation was in pre-production there was a lot of speculation that it was going to be a big flop… as surely Gene Roddenberry couldn’t “lightning can strike twice” after his success with Star Trek: The Original series. So you can imagine Patrick Stewart already quite sceptical. To make matters worse, once he arrived in the USA the Los Angeles Times called him an “unknown British Shakespearean actor”.

21.  Was Leonard Nimoy’s father a barber?
Emdad, something I’ve never heard about! (He specialised in giving his patrons a “Spock Cut.”)