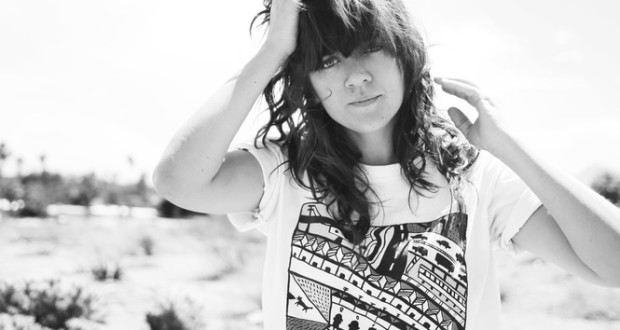 Electropopsters Metronomy announced months ago that they would be playing Alexandra Palace on 5th December. (Check them out on the video on our home page for the next few days, which shows them performing The Upsetter at this year’s Field Day.) Now it’s been revealed that Aussie singer-songwriter Courtney Barnett will be supporting them at the North London gig.

Courtney’s based in Melbourne. Her first EP – I’ve got a friend called Emily Ferris – came out two years ago, on her own label (Milk! Records) and her second EP – How to carve a carrot into a rose – followed a year later. The first was well reviewed in her home country, with the second one bringing her to the attention of the listening public far beyond Australia’s shores. Both have now been released internationally as a double EP under the title A sea of split peas which showcases the great variety in her work.

Courtney doesn’t exactly hang around rhyming “moon” with “June” – as you might have guessed from the EP titles. Her songs tell a story: for example, Avant Gardener tells the story of an anaphylactic panic-attack in the midst of an Australian heatwave, with lyrics like “The paramedic thinks I’m clever cos I play guitar, I think she’s clever cos she stops people dying.”

Courtney’s also known for her energetic live performances, so don’t miss out on this rare UK performance.

•Tickets for Metronomy, supported by Courtney Barnett, are on sale at:
https://www.songkick.com/artists/16165-metronomy