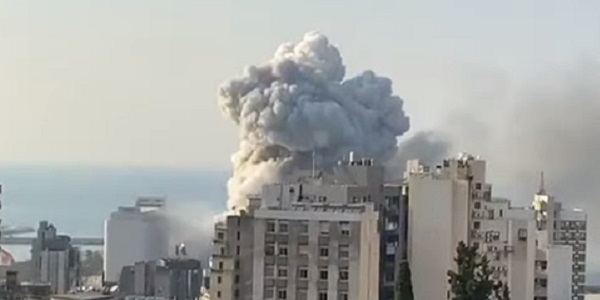 Smoke rises above the city

A HUGE explosion has occurred in Beirut, capital of Lebanon. Details are still emerging, but the explosion seems to have happened in the port area. It is thought that there may have initially been a fire, which was then followed by the explosion itself. 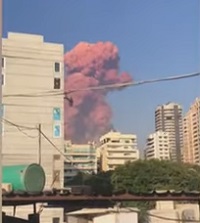 Witnesses have reported that debris rained down on large parts of Beirut, with some coming down outside the city and buildings outside the city shaking. A large cloud of smoke could be seen across – and from outside – the city.

There are reports that ten bodies have already been recovered, while hospitals are being overwhelmed by the numbers of injured coming to their doors.

The cause of the explosion is unknown, with speculation on possible causes including:
●this was some sort of accident at an explosives depot known to be located in the port area;
●Lebanon’s economy has all but collapsed, causing tension and the return of dmonstrations – allowing some political groupings to try to capitalise on and gain from the crisis;
●a UN tribunal has been conducting a trial of four suspects accused of killing former Prime Minister Rafik Hariri by car bomb in 2005, and it is due to announce its verdict on Friday – which could again be increased local tensions.