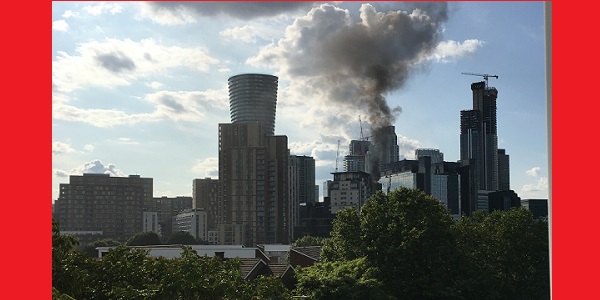 THICK BLACK smoke could be seen rising from a high rise building on the Isle of Dogs at 5.40pm today, Friday, 12th July.

Flames were leaping from the roof.  Sirens could be heard around the Island as emergency services vehicles rushed to the scene while helicopters flew overhead.

The fire appeared to be blazing on a top floor balcony.  Firefighters attended and were able to tackle the flames on the balcony.  By approximately 6.45pm the flames were out.

Thanks have to go to the firefighters who tackled this blaze, whose swift response to this and other incidents is very much appreciated in Tower Hamlets.

Flames can be seen on the roof of the building.

To see our photo gallery, go to:
More Photos