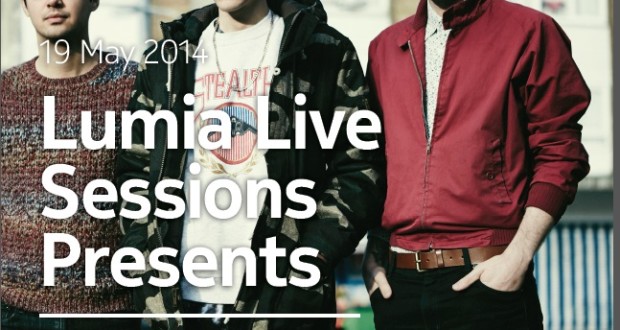 Monday’s the night for Years & Years

“Seeing Years & Years live last year was probably the best surprise of 2013. Young Olly Alexander has the holy fire in his hands: a soulful voice with a crazy R’n’B vibe, which enables him to be simultaneously emotional and groovy. Going to a Years & Years gig is to experience a wide range of feelings, from joy and euphoria, to melancholia and tears.”

These words from Christophe Abric, founder of La Blogothèque, are typical of the reviews and comments circulating on London based electric soul three-piece band Years & Years. If you’re intrigued, you now have a chance to go and hear them for yourselves, because the band is playing an exclusive acoustic session in London’s abandoned Aldwych Underground station on Monday 19th May. They’ll headline the second instalment of the 2014 Lumia Live Sessions (LLS) – a series of fee gigs in unusual venues across the UK showcasing the top emerging talent that the music industry has to offer.

ELN: How did you first get into music?
Y&Y: Mikey used to sit under his dad’s piano during his music lessons, Emre’s parents bought him a Beatles bootleg album which blew his mind and Olly’s always been singing at anyone who’ll listen.

ELN: What brought you together as a band – and what made you turn the corner and realise that what had begun as a hobby could eclipse your day jobs?
Y&Y: Mikey and Emre met online through findabandmate.com and Olly met Mikey at a dinner party. We’d all been in bands before and wanted to start playing music again, that’s basically how is started. It was just something we did because we love playing music and we spent a good few years messing around and doing bad gigs at questionable venues.
I’m not sure when the turning point was. We played a show in Paris towards the end of last year and it made us feel like maybe we were getting somewhere… having an actual crowd outside of London was totally new for us. We celebrated by getting drunk and dancing to Aaliyah.

ELN: What music are you listening to yourselves?
Y&Y: We’re all into a mixture of different stuff, we’re excited for the new Little Dragon album and new stuff like Kelela, Banks, Tourist and Jungle. Olly gets obsessed with finding new music and rinsing each track until everyone is sick of hearing it.

ELN: East London is a diverse community, which has had its troubles in the past. Do you think young people are divided by the different kinds of music that they identify with, or can new music be a force to break down barriers and bring young people together?
Y&Y: I think the music you listen to is always going to be an important part of your identity, especially as a young person, but the way we listen to and share music has totally changed over the last five years. There’s so much stuff out there and I think it’s less “I only listen to this and you only listen to that” and more about sharing the music you really love. So in that respect it’s definitely a force of good.

ELN: What’s next for Years & Years?
Y&Y: We’ve got a bunch of live dates coming up and festivals over the summer, we’re also trying to finish writing the album and our next single will be out soon. There’s a lot going on, it makes my head spin a bit to think about it.

ELN: The Lumia Live sessions are all about up and coming artists performing in unusual venues. Is Aldwych Tube station your most unusual location to date?
Y&Y: Yeah it’s pretty unusual, although we’ve actually played on a boat, on a train, in a cathedral and in a toilet, I’m hopeful we’ll one day get to do a gig in space.