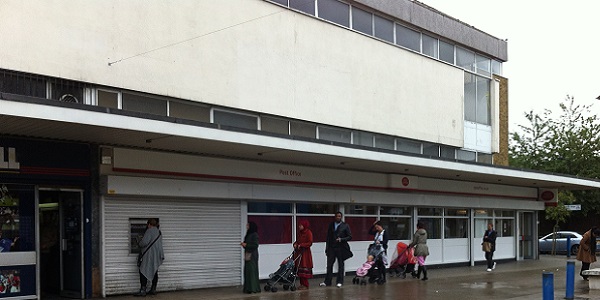 Chrisp Street plan leaves 400 Muslims out in the cold

CONTROVERSIAL plans to redevelop Chrisp Street market could see up to 400 Muslims lose their prayer facility and be left with nowhere else to go.

The problem centres on the building in Market Street which houses a Post Office (on the ground floor) – the upper floors of which are used by small businesses, including Channel I Europe. The building is privately owned and is managed by “specialist property investor and manager” the Chromex Group.

Also on the upper floor is a small prayer room, run for the past three years by the Noor-E-Madina Foundation (a registered charity), and attached office. The prayer room is used by a small group of the faithful for daily prayer sessions – but on Fridays the room accommodates a congregation of up to 400, who have to pray in sessions because of the capacity of the room. 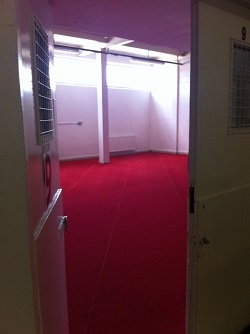 A glimpse inside the modest prayer room

The room is very much a prayer room and not a fullscale mosque. However, the fact that so many people gather on a regular basis does allow for important messages – public health information or community safety issues – to be passed round the local Muslim population very efficiently and quickly.

However, it all began to go wrong on 24th July, when Tower Hamlets Council passed a planning application submitted by Poplar Harca to redevelop the whole market area.

Part of the proposed redevelopment allows for the “Post Office” building to be demolished, with a new building being erected on site – and it seems the building’s owners are keen to get going.

After the planning application was passed, users received letters from Chromex asking them to quit their premises within days. Users say they received verbal offers to extend their tenancies for short periods – if they paid huge rent increases.

The prayer room received a letter, by email, asking them to quit the premises immediately – failing which the locks would be changed (and they would be charged for the work). Verbally, organisers were told that they could secure a three month extension – but their rent would go up from £1,750 per month to £2,750.

A similar story came from a local business which operates from a room in the building. It provides a vital service to local people and cannot abandon its clients – or the local people it employs. The business did not want to be named, but they too have been asked to pay a huge rent increase if they want to stay on in the short term.

Prayer facilities are at a premium in the Chrisp Street area. The nearest Mosque, on East India Dock Road, is also too full and cannot accommodate any further participants in Friday prayers. Mosques and prayer rooms further afield can take some extra worshippers – but at the moment it looks like the bulk of the congregation will be left with nowhere to go.

A spokesperson for Poplar Harca confirmed that the Post Office will be found temporary accommodation, if necessary, during the redevelopment – and a permanent home in the new market area. They admitted that they did not currently have similar plans to accommodate the prayer room’s congregation.

“We are willing to work with everyone involved to try to find a solution,” said the Harca spokesperson. Chromex were unavailable for comment.