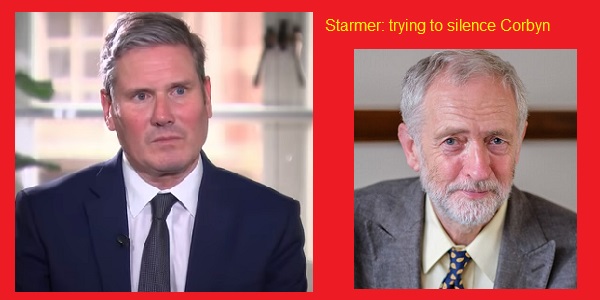 Starmer (left): is he being vindictive towards Corbyn (right)?

ONLINE PETITIONS in support of Jeremy Corbyn are gathering support in the face of Starmer’s refusal to accept the verdict of the Labour Party and accept Corbyn back as a Labour MP.

Corbyn was initially suspended from the Labour Party after commenting on a report from the Equality and Human Rights Commission into allegations that the Party had not handled complaints of anti-semitism in the Party in a timely and fair manner. He was reinstated a few days later by the appropriate Labour Party committee. With his party membership fully restored, it should have been a formality to declare that he could once again sit in the House of Commons as a Labour MP. A furious Starmer, dismayed at the verdict of the Party, refused to reinstate Corbyn as a Labour MP.

Starmer’s move is the latest in a series of statements which have worried Labour Party members and raised questions over whether he is prepared to follow Labour Party policies and procedures – or whether he sees his role as Leader as one of telling the Party what to do and expecting them to cheer.

Starmer was the leadership candidate backed by the Labour MPs who were appalled that Corbyn became party Leader – and who did so much to undermine and destroy his leadership. Now Starmer is in post, these MPs face the even greater challenge – of trying to win over members. This is not a good start.

Which side will emerge victorious in the battle may not be clear for months. Already Labour Party sources are saying that membership is plummeting as people resign or do not renew their membership, which could give Starmer a clear run to curtail members’ input on governance and policy. However, others are rallying the left and urging them not to resign, but to try to hold Starmer to account for his actions. After all, it is not as if there is a credible alternative Party which can take on the Conservatives in the UK, they argue – the Labour Party has to do the job.

As the battle gains pace, amid the COVID-19 restrictions, supporters have turned to online petitioning to put their views across.  The internet is pretty full of online petitions these days, and some would say the tool has little effect as a result. However, Corbyn supporters are urging people to sign. Labour Party members have been told they cannot discuss “the Corbyn issue” in their local parties, so there is little alternative method of showing Starmer that stamping out alternative viewpoints in the Party is not appreciated.

Corbyn supporters are urging members and supporters to show their disapproval with Starmer’s actions by signing these two petitions, and any others that emerge – and working to getting others to sign them too.