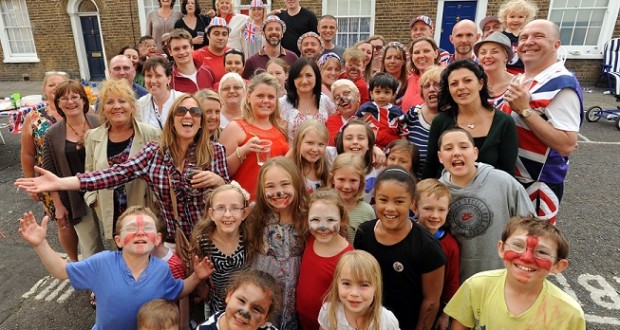 Residents in Flamborough Street celebrate the royal wedding in 2011

Tower Hamlets Council is inviting community groups to apply for grants of up to £250 to fund street parties or local events to honour the Queen on account of her 90th birthday this month. Events may be held on any date between now and 12th June.

Just as poverty is a key factor leading to illness and premature death, so the wealthy tend to live longer – especially those who do not have to do their own washing up most the time. There is therefore something rather invidious in Her Majesty’s poorer and shorter-lived subjects celebrating the fact that she is statistically unadventurous and has, as predicted, lived longer than they are likely to.

It is also ironic that the Council has seen its funding slashed and has had to cut services – but it has found the cash to honour the woman who is the single largest recipient of handouts of public money in the country. It is somewhat incongruous that in Tower Hamlets, where there have been many allegations (but not much evidence) that elections of local leaders have not been run fairly, money is being spent on a woman who has never had to face election but owes her position as head of the state to internecine domestic squabbles and wars which took place centuries ago.

The finale of the nationwide celebration of the Queen’s age culminates on Saturday, 12th June with an event called the “Patron’s Lunch”, when the Queen will hold a picnic lunch for the 600+ charities of which she is the patron. Local communities are encouraged to hold similar lunches or street parties in solidarity with the gesture.

The £250 grants will be paid out of the Event Fund, which funds local arts events with small grants. Applications can be made at any time and are considered once a month. Groups holding street parties may need permission from the Council.

•The deadline to apply for a grant for an event in June is 21st April and the deadline for Street Party applications is 30th May. For more details email festivalsandevents@towerhamlets.gov.uk or call 020-7364 7907.

•Application forms for grants or permission to hold a street party are available at: www.towerhamlets.gov.uk/arts

2016-04-06
admin1
Previous: Honours even as Jawhara and Stepney meet in Moroccan showdown
Next: US primaries: has Trump run out of gas?