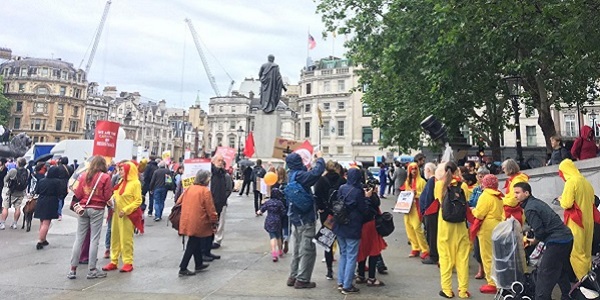 Crowds turn out to boo Trump

THE LABOUR PARTY had a large presence among the crowds out in London today – despite factors such as Eid keeping many members at home.

Jeremy Corbyn addressed the crowd, explaining that Trump was not welcome because of his offensive rhetoric – and also because of his cantankerous foreign policy which could yet provoke another war, in which hundreds of thousands of people could lose their lives. Corbyn said that people around the world would be looking to today’s protest, knowing that those out on the streets of London were expressing solidarity with many other struggles against US domination.

Opponents of Corbyn tried to claim that the Labour Leader was being hypocritical because he had not demonstrated against various other tyrannical state leaders on official visits. However, Corbyn has a list of protests he’s been on as long as your arm, and probably someone else’s too – so his speech reflected a comprehensive pro human rights stance. 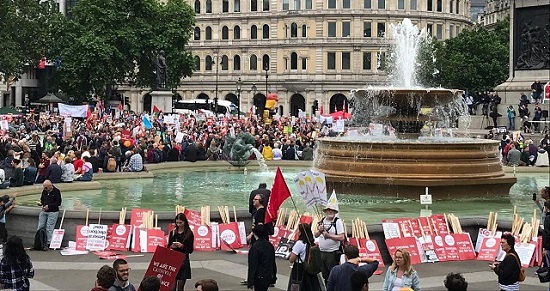 Trump drove past these crowds in Trafalgar Square

Trump avoid most of the protests on what was his political day. However, it does seem that his motorcade had to drive by the crowds in Trafalgar Square as it made its way to Downing Street, where Trump was due to have talks with Prime Minister Theresa May. Trump’s car would have been close enough to protesters for him to have seen the famous “baby Trump” balloon.

Once he reached Downing Street – cordoned off by police to ensure demonstrators could get nowhere near – Trump had his chat with Theresa May, whom he praised fulsomely at the concluding press conference. Trump spoke up in favour of Brexit and said that the US and UK would be able to agree a trade deal.

Trump will round off the day with another formal dinner – this time one hosted by himself, at the US Ambassador’s residents in Regent’s Park. Whatever else Trump says about this visit to the UK, he won’t be able to claim that he went hungry.