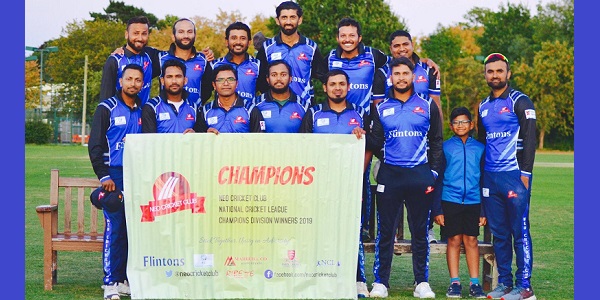 A REMARKABLE end of season finale saw Neo CC crowned kings of the National Cricket League Champions Division for 2019. The team’s work rate, determination, flair and consistency paid off as they wrapped up the final match of the season.

It was a league decider game between table toppers Neo CC and the number two team Rat Pack CC 2, played at the Walkers Cricket Ground. Neo CC came out on top, with a victory of 96 runs against Rat Pack CC 2.

Ashfaqur Nobel and Ashraful Islam opened the batting for Neo CC on a flat batting pitch. Ashraful was dismissed with the score at 28. Left handed batsman Aminul Islam Shihan went in and produced a 71 run partnership with Nobel before Nobel was dismissed by Mahela on 38.

No. 4 Zisan Abedin (33) contributed another decent partnership of 63 runs with Shihan and fell LBW by Rizwan. Shihan’s masterclass came to an end when he was out on 90 from 76 balls, which included 13 fours and a six. Rokan Arafat Mashuk produced a cameo of 27 runs from 21 balls to take Neo CC to a competitive total.

Chasing 246, Rat Pack CC suffered a blow on the first ball when Nobel dismissed Firoz with an out swinger. Off spinner Zisan Abedin was magnificent with his spellbinding 25 runs from an eight over spell. Raees Patel (43) showed some resistance from one side with the bat, but there were not many to take the lead on this run chase for Rat Pak CC 2.

Captain Fantastic Ayaz Karim went through the middle order of RPCC with a clinical four wicket haul for only 18 runs. Mohammed Hassan and Umair Khan took two wickets each. The other two wickets were shared by Ashfaqur Nobel and Shahriar Zahid. Vice Captain Shihan was outstanding with the gloves to take two catches and a stumping.

After the win Neo captain Ayaz Karim said, “Winning the league is always special for a club. Our boys worked really hard throughout the season and delivered something we can feel proud for many more years to come.”

National Cricket League Co-founder Sajid Patel added, “NEO deserve the spot you achieved this season. It was a hard fought and competitive season throughout the campaign.”