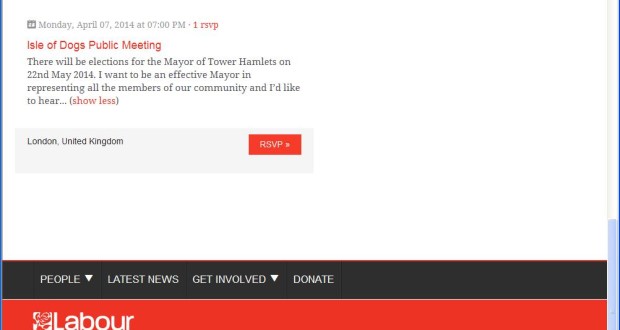 Somewhen last week, a couple of journalists attended a rally apparently called by Mayor Lutfur Rahman in Stepney – and wrote about the event on their blogs. Neither journo was particularly kind to Mayor Rahman – but at least they had something to write about.

Those who tried to attend the public meeting with John Biggs on the Isle of Dogs last night (Monday, 7th April) were even more grievously disappointed: they were there; John was not. In fact, the only person present who confessed they were a Labour Party member had nothing to do with organising the event and was also looking for a meeting to go to.

The event was clearly advertised on the Tower Hamlets Labour Party website. OK: not all that clearly. On the “upcoming events” page, under “Isle of Dogs Public Meeting”, apparently due to take place on Monday, April 07, 2014 at 07.00PM, Comrade Biggs got off to a good start explaining what it was all about. “There will be elections for the Mayor of Tower Hamlets on 22nd May 2014,” he stated. “I want to be an effective Mayor in representing all the members of our community and I’d like to hear…” – but there the man was cut off in his prime. “(show less)” was apparently what Biggs wanted to hear. Still, at least there was confirmation that the event was in London, United Kingdom: no silly stunts about going to London Ohio to talk about the Isle of Dogs. There was apparently “1 rsvp”, so they knew at least one person was coming.

However, more information was available to those intrepid punters who clicked on the meeting heading and got to a more detailed page.

“Posted by CHRIS WEAVERS 9pc on March 19, 2014” it began. Well that’s reassuring: Mr Weavers is known for his efficiency so we can expect something to the point. “Labour for the Isle of Dogs Public Meeting”: see? “Liquid error undefined method ‘html_safe’ for nil-NilClass”: WHAT? Comrade Weavers may be a bit New Labour, but “Nil Nil Class” is a bit much. Perhaps that’s what happens to you when you are only “9pc”.

Anyway, then Comrade Biggs gets into his stride. He says what he said before, but this time he explains that what he wants to hear from you is “what you want from your Council” and he wants “to work with you to shape the future of the Isle of Dog’s.”

Well the first thing Comrade Biggs’s local public will probably want to know is: where have all other other Dogs gone?  We always used to be the “Isle of Dogs”. When did we become the Isle of Dog’s”? What’s Labour done with all our other Dogs? The Isle of Dog’s… what?

Perhaps to take our mind off the culled canines, Biggs goes on to give us some detail. He wants to know about our experiences and suggestions on (“experiences on”? surely not): overdevelopment, housing, school places, our parks, road maintenance, community facilities and loss of community. Overdevelopment?  Is that how you sum up “the anarchy of development Labour let run unfettered when it ran the Borough from May 1994 to October 2010”?  Housing? Do you really want to know our experiences of living in the homes you insisted on selling off?

Anyway, it came to nothing. Because although he says he wanted to hear what we had to say, he didn’t come along to listen. Those who turned up had a brief and desultory chat amongst ourselves and went home again. There were no Labour councillors to take our photos. There was no mayoral candidate to step away from the crowd and talk to passers by. There were no Labour spokespeople to discuss Labour’s role on the audit committee which signed off the Council’s accounts or spokespeople to discuss all the problems Labour had with the accounts they had signed off.

There were no Labour spokespeople to hold press conferences or slag off the local press, and none to talk about the work the Council is doing to remove names of candidates who are current office holders from public places before 16th April like they always do.

So if you ever find yourself at a Lutfur rally and get a bit bored by the standing around and you go home before the canvassing starts, console yourself with the thought that at least the man turned up to his own rally.