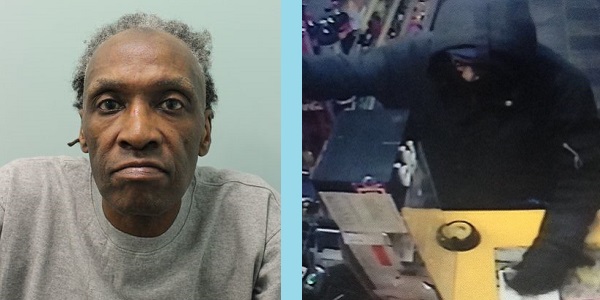 A MAN WHO committed robberies across East London, as well as carrying out two bomb hoaxes, was sentenced to life imprisonment at Snaresbrook Crown Court last week – with an order that he serve at least seven years.

Omar Farooq, 63, of Melford Road, East Ham, had earlier gone through a two day trial at the Court and was convicted of:
•two counts of robbery and one of attempted robbery;
•two counts of possession of an imitation firearm with intent to commit an indictable offence;
•two counts of carrying out a bomb hoax.

The string of offences began last October. In the early hours of the morning, Farooq went to a supermarket in High Street South, East Ham. He approached a member of staff, who was opening up the store, from behind and pressed an object into his back – an object which the members of staff believed was a gun. Farooq demanded the member of staff open the tills, which he did, and open the safe, which he said he could not do. At that point a delivery driver arrived and Farooq ran off.

A fortnight later, Farooq went into a post office on the same road. He was dressed in black and had his face covered. He slid a note under the counter which said that he had placed a bomb in the store which would go off in three minutes – or sooner if he wasn’t given money. He said he had a gun. He placed an item in the shop’s photo booth – saying this was the bomb – and then ran off. The item turned out to be a small blue alarm clock.

Farooq was back in the same road ten days later – this time at a newsagents. He waved an imitation gun at the owner and demanded money. When the owner refused to give him any, Farooq said he had a bomb and threw a small clock into the shop before running away.

Police investigated and found forensic evidence which led them to identify Farooq as their suspect.

Detective Constable Annie Hendy of the Metropolitan Police Flying Squad said, “Farooq targeted venues along a road just around the corner from his home address. He was actually a regular customer at two of the locations. These horrific offences had a huge impact on the tight-knit trading community within the area and left one family feeling as if they had no option but to sell their premises after 33 years of trading.

“Farooq is a career criminal who tried to claim in evidence he had retired from a life of crime. He showed no regard for the welfare of his own community whilst carrying out these terrifying robberies. He also showed no respect for the criminal justice system and absolutely no remorse despite having previously been jailed for exactly the same offences he has now been sentenced for.”