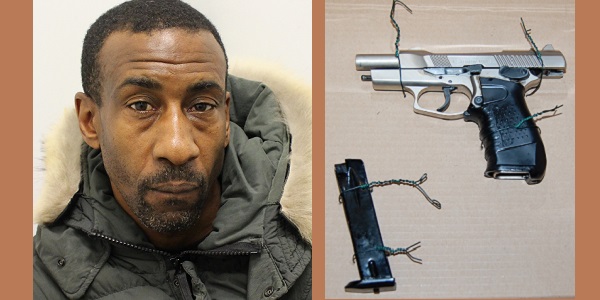 Walters, and some of the guns he was putting out on the street

East London gun-runner off the streets for life

Walters pleaded guilty to the first two of those charges and was found guilty of the second two after a trial at Snaresbrook Crown Court.  He returned to the Court last month for sentencing. The Court heard that he was of no fixed abode – but he supplied weapons at various points across East London.

The first offence was spotted by officers taking part in a Metropolitan Police Trident Gang Crime Command proactive operation in Erskine Road, E17 in June last year. Walters was seen getting into the back of a waiting taxi and then getting out again. The taxi drove off but was stopped shortly afterwards on Orient Way, E11.

In September last year, the Trident and Area Crime Command ran a second operation – this time in Grange Road, E13. Walters was seen entering a property and leaving shortly afterwards. Once he was clear of the scene, officers entered the property and arrested a man he had met there. A handgun and 58 rounds of ammunition were found in the property. The man arrested was charged with possession of a firearm and ammunition and pleaded guilty. He was sentenced to 30 months in prison at Snaresbrook Crown Court last December.

Police found forensic evidence and phone records which identified Walters. He was arrested and charge in February this year. He pleaded guilty to the possession charges but denied that he intended to endanger life. A jury found him guilty of the two charges relating to endangering life after a nine day trial at Snaresbrook Crown Court.

The Court heard that Walters had been found guilty of supplying firearms, including a Mac 10 machine gun, back in 2010. He was sentenced to ten years in prison, but was released on licence in 2015.

Detective Constable Gareth Starr, from the Met’s Trident and Area Crime Command, said, “Due to an intelligence-led investigation and working alongside our colleagues from the firearms unit, not just one, but three men, who were in possession of firearms, have now been taken off the streets.

“At a time when too many people are falling victim to gun crime in London, this is a real win for the Met, and Londoners, who can rest assured that we are absolutely cracking down on gun crime. Taking these men and weapons off the street will no doubt have saved lives down the line. The fact that Walters and his two associates all pleaded guilty, shows they knew from day one that what they were doing was wrong and more importantly, illegal.”

Detective Inspector Steve Meecham added, “I’m very thankful to my officers for their dedication in bringing three men to justice and securing a lengthy sentence which will put Walters away for a long time. I’m sure this result will strongly deter anyone from even considering picking up or selling a firearm.”

The Sentencing Judge, HHJ P Southern, commended DC Starr for his professionalism, both during the course of the investigation and in the preparation and presentation of the case before the jury. He stated that DC Starr had assisted in the placing before the court cogent evidence that had led to the outcome of two firearms and ammunition as well as the person who had been in possession of them being removed from the streets of London.