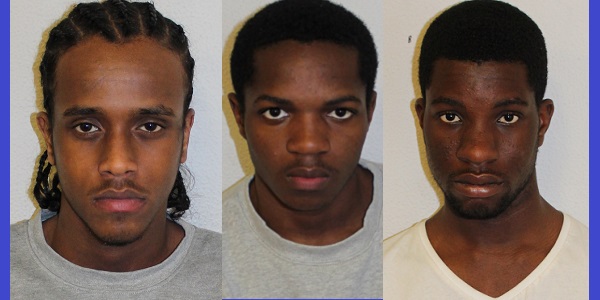 TWO YOUNG MEN from East London were jailed last month after being found guilty of a series of robberies – and injuring their victims, some very seriously, with knives and acid. The third member of this violent gang was from North London.

The Court listened to a gruesome saga of attacks and robberies which the three had committed in a three week period over the end of April and start of May this year. They began by robing a taxi driver, threatening to stab him to make him hand over his money. They repeated this crime – moving on from threats of stabbing to actually showing the drivers a knife which they said they would use and pinning the drivers down.

They then moved on to a new way to find victims: they began answering and placing adverts on Gumtree involving the sale of mobile phones.

•They met a man in Barnet, purportedly to buy a mobile phone from him – but when he arrived, they sprayed ammonia in his face and stole the phone. The victim sustained permanent damage to his eyesight and continues to suffer psychologically as a result of the trauma.

•They arranged to meet another man in Meadow Close, Barking, pretending they would sell him a phone. They sprayed acid in his face and stole the cash he had brought, thinking he would be buying a phone, and the contents of his wallet – after which they sprayed him with more acid. This victim has also sustained permanent damage to his eyesight and has lost his job as a result. 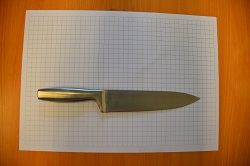 One of the knives held by the gang

The gang’s downfall came when police managed to spot the pattern of attack and went on to intercept the three as they took a taxi from Enfieldto Ilford. Police suspected they were about to commit another robbery. The three were arrested by police – including armed officers, brought in to ensure a speedy arrest and minimise danger to the public. Between them, when they were arrested, they had a bottle of strong acid, a 22cm long knife, balaclavas, several phones – and nearly £2,000 in cash.

The Court heard one of the victims describe the impact of the attack on him. “The initial injuries were that my skin was burnt all over, even in my mouth and on my tongue,” he said. “Even after I gave them what was in my pockets, they kept pouring acid over me, just because they could.”

•Miracle Osondu, 19, of Constance Street, E16, was sentenced to eleven years, extended to 15 years, in prison after pleading guilty to conspiracy to rob. The charge was based on 19 counts of robbery as well as a planned robbery. He had also pleaded guilty to possession of an offensive weapon and possession of a bladed article. A separate charge of theft from 2017 will remain on file. Osondu will serve a minimum of seven years and four months in prison.

•Mohammed Ali, 17, of Ilford, was sentenced to eight years, extended to twelve years, in prison after pleading guilty to a charge of conspiracy to rob based on 19 counts of robbery as well as a planned robbery; possession of an offensive weapon; and possession of a bladed article. Ali will serve a minimum of five years and four months in prison. The Judge lifted reporting restrictions so that he could be named in the press.

•The third member of the gang, Antoine Mensah, 21, of Commerce Road, N22, was sentenced to 13 years, extended to 17 years, in prison after pleading guilty to a conspiracy to rob comprising 19 counts of robbery as well as a planned robbery; possession of an offensive weapon; and possession of a bladed article. Mensah also pleaded guilty to six counts of assault in an unrelated case. Mensah will serve a minimum of 8 years and 8 months in prison.

Investigating officer Detective Constable James Rush, from Enfield Major Crime Unit, said, “These males appeared to feel no guilt over their actions, using strong acids, alkalis, and knives, to rob and maim their victims without a second thought for the impact the injuries they inflicted would have.

“Over the course of their offending they carried out 19 robberies, leaving victims with life-changing injuries. They also conspired to rob many more. They are dangerous individuals and these lengthy prison sentences are the only way to ensure the public are kept safe.

“Their behaviour is truly shocking. I commend the bravery of all the victims and witnesses who provided the evidence to help secure these convictions. I would also commend the efforts and teamwork of the many officers across multiple units whose work contributed to this excellent result.”