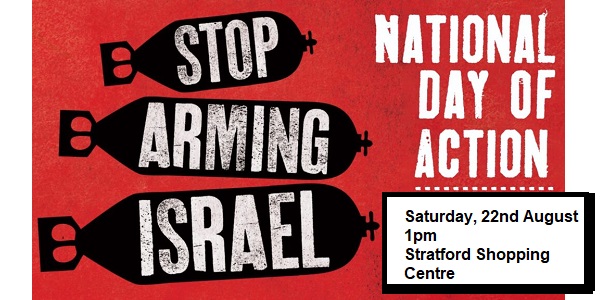 EAST LONDONERS will be holding a protest in Stratford Shopping Centre on Saturday, 22nd August – calling on the world to stop arming Israel and, thereby, bring an end to the bombing of Gaza and other military aggression.

East London campaigners will gather in the forecourt of the Stratford shopping centre (the old, traditional one – not the sparkly new one) at 1pm. They will be running an information stall to increase public awareness of who is arming the state of Israel – and what the terrible consequences are.

The Campaign Against the Arms Trade (CAAT) has calculated that between 2014 and 2018, the UK issued export licenses for £364 million worth of military equipment and technology. What did the exporting companies – and the governments which granted these and other licences – think the state of Israel would do with these weapons? They don’t put the weapons in a cupboard marked “deterrent” and then dust them once a month.

Stratford’s the place to go and do your shopping this lunch time – and learn a bit more about which UK companies invest in selling arms to the Israeli state.

•To watch Sybil Cock from East London PSC talk about Palestine and this protest, go to:
Vodcasts

•For more information about the East London event, go to:
East London protest

•Read more about it:
Reports on Palestine