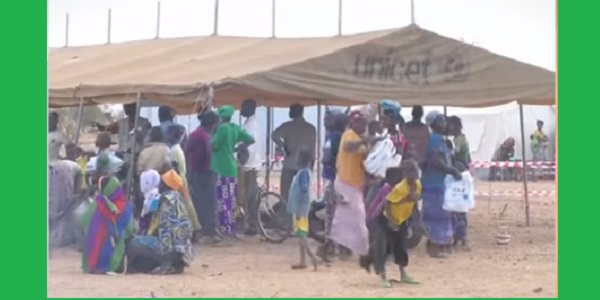 Temporary shelters are being established for the internally displaced in Burkina Faso.

FIFTEEN WORSHIPPERS were killed on Friday when the Grand Mosque in the village of Salmossi, Burkina Faso, was attacked by gunmen during prayers. Two other worshippers were injured.

The village is in the north of Burkina Faso, one of Africa’s poorest countries, and is close to the border with Mali. The recent incident comes after a series of attacks over recent years which have seen hundreds of people lose their lives.

The Burkina Faso armed forces sent troops to keep the peace and calm the situation, but nonetheless many villagers left the village, fearing that there would be a follow up to the attack on the mosque.

Militants held power in northern Mali seven years ago, but were eventually expelled by French armed forces. The recent attacks in Burkina Faso are thought to be the work of those displaced militants trying to find a new power base. The number of attacks is escalating: the UN estimates that over a quarter of a million people in Burkina Faso have been internally displaced in the last three months.

Observers are concerned that the jihadist forces are trying to divide the community. |Burkina Faso has a history of being a relatively tolerant country in terms of religion, but last week’s mosque attack comes after attacks on a number of Christian churches at the start of the summer.

The country’s economy is not doing well, and it is thought that the jihadists are recruiting locals who are jobless and living in poverty. The jihadists have also been targetting schools, trying to force them to close down – with some success in the north of the country, where government forces have been either reluctant or unable to intervene and maintain peace, despite government promises that law and order would be restored.