Films of the week

Prometheus
Prometheus is director Ridley Scott’s return to science fiction – and co-writer Damon Lindelof’s return to the kind of big, heady themes he explored for six seasons of his landmark TV show Lost. It’s a natural pairing, and one that imbues Prometheus with Scott’s stunning visuals and Lindelof’s ideas that are even more interesting to discuss after the credits roll – the innate desire to surpass our parents, say, or the inability to find answers to life’s most nagging and important questions. But it also makes for an ultimately disappointing film, as the tense scares and thinly-sketched characters reminiscent of Alien give way to a baffling finale, offering no resolution about either its Big Questions or the few characters we’ve come to care about. It’s aiming to be both an epic space thriller and a spiritual treatise, and watching it almost accomplish both makes it all the more frustrating.

What’s good about Prometheus, though, is good enough to be worth seeing. The 3D is among the best I’ve seen, first showing off with a crisp early sequence of DNA replicating itself, and ending with the kind of audience shock that 3D was made for. And Michael Fassbender’s performance as the android David, full of crisp movements and deliberately blank facial expressions, is utterly engrossing. As other characters about the Prometheus ship gradually become inconsistent or cannon fodder, David remains the enigmatic life force of the film. Noomi Rapace, as the scientist Elizabeth Shaw, is also quite good – along with her boyfriend and partner (Logan Marshall Green) she’s discovered the series of ancient cave drawings that point the Prometheus to a far-off galaxy, where she fervently believes they will meet the Engineers responsible for human life, aka. God.

We see in the film’s opening scene that she is right – an alien did visit earth to create life – but Shaw is faced with skeptics anyway, from the anonymous roughnecks helping pilot the Prometheus to Meredith Vickers (Charlize Theron), a no-nonsense corporate type who hates everyone on board for whatever reason. Once the Prometheus arrives on the distant planet the action remains admirably concise, as the explorers visit the underground caves that hold clues to alien life and return to the ship. There’s a marvellous, building dread as we anticipate the chaos we know is coming. Once disaster arrives, though, the narrative starts falling apart – characters make choices that make no sense, characters express knowledge they have no way of knowing, and one key character emerges in the third act in a reveal that only muddles the already scattered narrative. Shaw’s shattered faith in her Engineers, and David’s mysterious role in the on-board destruction, remain intriguing threads throughout the well-orchestrated action beats, but so much else is lost in the shuffle it’s hard to engage on any level beyond being dazzled by the titanic special effects.

As a big-budget, wide-ranging ensemble action film, Prometheus is so very different from Alien that it’s not really worth comparing the films, but it’s hard not to miss how concise Alien was, picking off its characters on by one, slowly teasing out one horrible monster, and leaving us just a couple of existential questions – not dozens – to wrestle with in the end.

It’s clear that Prometheus never intended concretely to answer many of the big notions it brings up but, much like he did for the end of Lost, Lindelof settles on feeble spiritual ideas as his story’s resolution, without the audience’s attachment to the characters this time to bolster them. The visuals and scope of Prometheus are captivating, but the story drops constant hints at something bigger and more complete, then throws up its hands and follows through on none of it in the end. It’s very fun to walk out of the movie discussing all the ideas it brings to mind, but it would be even more fun to have a movie that could actually capitalise on them. (Katie Rich – Movie Review).

Men in Black 3
Agents J and K are back in time. J has seen some inexplicable things in his 15 years with the Men in Black, but nothing, not even aliens, perplexes him as much as his wry, reticent partner. But when K’s life and the fate of the planet are put at stake, Agent J will have to travel back in time to put things right. J discovers that there are secrets to the universe that K never told him secrets that will reveal themselves as he teams up with the young Agent K to save his partner, the agency and the future of humankind.

Top Cat – The Movie
Benny the Ball, Fancy Fancy, Choo Choo, Spook and Brains, and the indisputable leader of the gang TC, are back at war with the long arm of the law when the menacing Police Chief Strickland moves to town, ousting the bumbling Officer Dibble. Determined to put a stop to the feline antics in Hoagy’s Alley with the help of a bullying robot police force, the tech-savvy Strickland threatens to be the most dastardly enemy the gang has ever faced. With their wise-guy lifestyle hanging in the balance TC and friends are forced to cash in on another of their 9 lives to curtail Strickland’s reign of terror and claw their way back to the top!

Ill Manors
A unique crime thriller set on the unforgiving streets of London, Ill Manors follows six disparate lives, all struggling to survive the circles of violence that engulf them. There is ex-dealer Kirby, who has just been released from prison; thug Ed who will stop at nothing to find his missing phone; troubled Michelle who is just looking for her next hit; young Jake who finds himself drawn to the local gang; Chris, who seeks revenge; Katya, who is desperately trying to escape this foreign land; and Aaron, our main protagonist who is just trying to do the right thing. 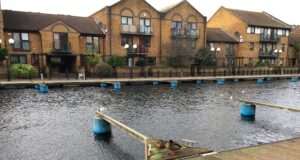