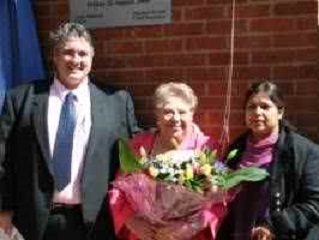 The death has been announced of Mildred Gordon, former MP of Bow & Poplar. Mildred died last Friday, aged 92. Her funeral will be held next Friday, 22nd April.

Mildred was elected MP for Bow & Poplar in 1987 and was re-elected at the following General Election. Boundary changes abolished Bow & Poplar in1997, and the resulting open selection contest for the new seat of Poplar & Canning Town saw Mildred lose the opportunity to be an MP in a Labour Government – and be able to deliver on the causes close to her heart.

Mildred was a campaigning MP in opposition, under the Tories. She worked for many women’s causes, but there were two issues in particular she brought to national attention for the first time: nuisance phone calls and the role of carers. On the latter, she campaigned for carers, particularly those caring for family members, to be recognised and also to be paid, as the work they did saved the state so much money. She was also closely associated with the “Civilians Remembered” campaign to provide a memorial gardens to civilian casualties of the Second World War on the riverbank in Wapping.

Mildred was born and bred in the East End. As a child, she lived in the Highway, and as a young woman she would recruit young women office workers to the trade unions, while at night she was an ARP warden, watching out for enemy aircraft and the bombs they dropped. She would often say that working all day and being up all night was excellent training for being an MP – in the days when there were still many all-night sessions.

Mildred won respect from the local Bangladeshi community – then very small, in her constituency – for standing up against racism and fascism. She was appalled when the Isle of Dogs elected the first British National Party councillor in the UK – and delighted when, with the help of that community and many others – the BNP was thrown out at the following election, in May 1994, on a record turnout for a local government election.

She also worked with the local Somali community in her constituency, helping many with immigration problems which grew more serious as the Somali Government collapsed.

That was how most of her constituents knew her – as a woman who never adopted the airs and graces of someone who thought she was special but who spent her time on the green benches of the House of Commons trying to hold up the worst excesses of the Tory Governments and busied herself with helping all her constituents the rest of the time.

In the former, she was very effective. While she was an MP, two Tory front benchers were overheard talking about how effective she was in Parliament in exposing the Government. She once got a Tory Minister down to Poplar to show him how East Enders tried to keep their homes decent but were thwarted by under-investment in housing – making him stand in a lift “full of piss” (as she put it) to get up to the flat to show him what her constituents had to put up with.

In the latter task, caring for constituents, she was one of the first MPs to open a constituency office and pay a case worker to staff it. She also had some advice from an unusual quarter early on in her career. Some six weeks after she was elected, she was present when the Queen opened the Docklands Light Rrailway. The Queen asked Mildred how she was finding life as an MP. Mildred replied that the worst part was the terrible problems so many of her constituents had and how, although she could make representations on their behalves, she had very little power to help them. The Queen said she knew what Mildred meant, because “Once they find out you lot can’t help them, they all write to me.”

Mildred took the challenge and never stopped working for her constituents, on an individual level and also as people who needed, and deserved, a Labour Government. She would have hoped that, under Jeremy Corbyn MP – who, together with Tony Benn MP, helped her find her feet as an MP – we shall finally get one.