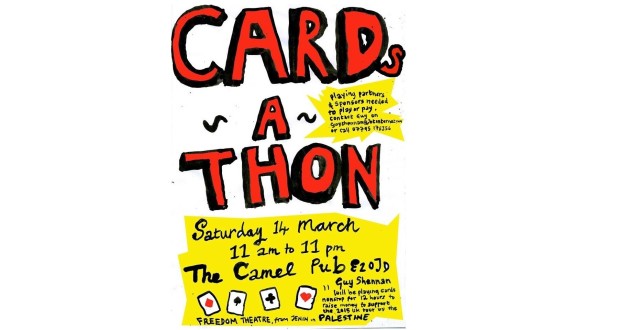 The first ever tour of the UK & Ireland by Freedom Theatre, which is based in Jenin Refugee Camp in Palestine, will be taking place in 2015. The tour includes a London performance of a brand new play called The Siege at Battersea Arts Centre in May.

Tower Hamlets Jenin Friendship Association (THJFA) is aiming to sponsor one of the six actors who will be taking part in the performance of this specially commissioned play. Palestinian actor and singer at the Freedom Theatre Ahmed Tobasi appeared at a packed performance organised by THJFA at Wilton’s Music Hall last year, where he stunned the Tower Hamlets audience with his accomplished singing and inspiring talk about the work of the Freedom Theatre. To help raise the necessary funds in order to sponsor Ahmed to take part in the forthcoming London performance of The Siege, local resident Guy Shennan will play cards for 12 hours non-stop, from 11am to 11pm, on Saturday, 14th March at The Camel pub in Bethnal Green.

This isn’t the first time Guy has undertaken such a feat. Over the course of the last four years he has also successfully staged a 12 hour Quiz-a-Thon and 12 hour Backgammon-a-Thon in aid of the work Tower Hamlets Jenin Friendship Association.

This time round, supporters will “pay to play” an addictive form of Whist named “Oh Dammit” with Guy at an allocated time on the day. If you’re interested in playing, please contact Guy direct on guyshennan@btinternet.com. If you can’t play on the day, you can also sponsor Guy to help raise money to make the tour happen by giving a donation directly to the THJFA account on http://www.thjfa.org.uk/?page_id=1428

•Details of the Freedom Theatre’s tour can be found here: http://www.thefreedomtheatre.org/news/the-siege-uk-tour-in-2015