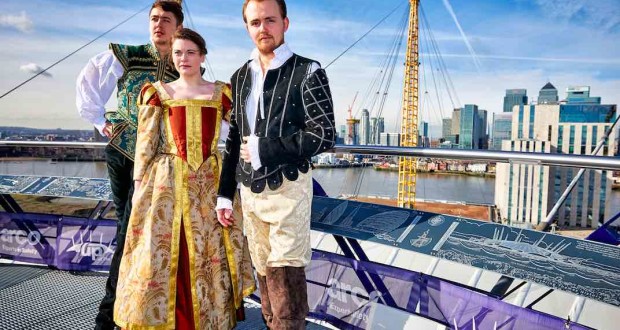 Actors from Grassroots Shakespeare London celebrate 400 years of Shakespeare with a special performance Up at The O2. The company will return at Easter to entertain Up at The O2 climbers.

Easter is usually associated with birth and awakening, and 2016 is actually the 400th anniversary of Shakespeare’s death – so his plays have all been with us slightly longer than 400 years. Nonetheless, the O2 (formerly the Millennium Dome) is celebrating Easter and “400 years of Shakespeare” all in one go, with plucky climbers invited to scale the O2 and watch exclusive performances from one of the highest points in East London.

“Up at The O2”, which co-ordinates visits to the top of the venue, will be working with theatre company Grassroots Shakespeare London, who will put on the exclusive performances to visitors who have walked up to the viewing platform on top of the O2 (52 metres above ground level). Visitors will be able to watch scenes from plays including Much Ado About Nothing and Romeo and Juliet, as well as a taster from Grassroots Shakespeare’s new production of Twelfth Night, which opens at Leicester Square Theatre in April. 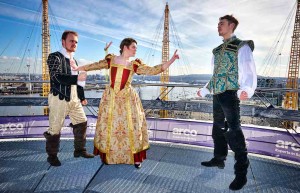 •A taste of Shakespeare Up at The O2 with Grassroots Shakespeare London
Saturday 26th March, 10am-2pm
Booking essential. Tickets are limited, so book in advance to avoid disappointment.
To book tickets, go to:
www.theo2.co.uk/upattheo2.