Don't Miss
Home / Blog / Justice for Hillsborough is near! 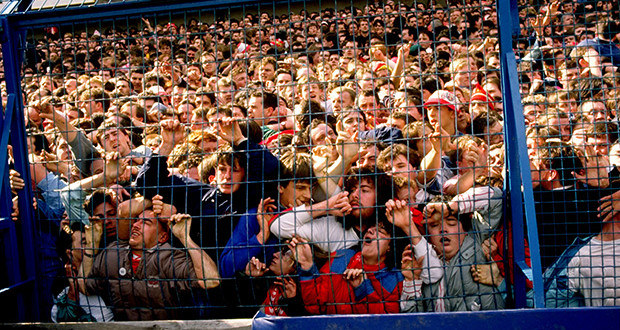 Justice for Hillsborough is near!

EMDAD RAHMAN meets with Andy Burnham MP to talk about 25 years of loss and pain. 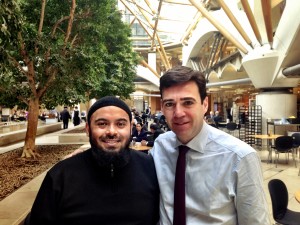 After 25 gruelling and heart breaking years, fresh inquests into the deaths of the Liverpool fans who died at or as a result of the Hillsborough Stadium disaster in 1989 have started. Emotions are running high in the aftermath of the original “accidental death” verdicts being quashed. The families have lost the likes of “Iron Lady” Anne Williams, mother of victim Kevin Williams, who has dedicated the last 25 years to seek justice.

The first day of the inquest, which is being held at a purpose-built court on a business park outside Warrington, east of Liverpool, saw families, friends and well-wishers turn up in their throngs. Some wore red, others wore scarves. Some carried framed pictures of the loved ones they lost during that woeful day.

New inquests were ordered after the original coroner’s verdicts were quashed by the High Court in December 2012 amid claims of a police cover-up. That came three months after an independent panel examining the disaster concluded that 41 of those who died would have had the “potential to survive” if they had received medical treatment more quickly.

For years, Labour MP and Shadow Health Secretary Andy Burnham has played a vitally supportive role to the families of those who perished at Britain’s worst sporting disaster: “Twenty-five years. The families have waited all that time for justice and I think finally it is on its way,” he said from the court.

Andy Burnham MP is a fabled Evertonian and when I met him he recollected the run up to that tragic day 25 years ago: “It was initially a dream scenario for the city with both teams lining up in opposing semi-finals – It meant there was a great chance of an all Merseyside final.”

The night before the semis, Burnham had been visiting his local pub to share the excitement with locals and fellow football fans. “There was plenty merriment and we swapped jokes and banter with Reds and Blues alike. It was competitive yet jovial, but soon the discussions took a turn and the subject changed to the venue. Many Evertonians expressed their trepidation at the thought of playing at Hillsborough – ‘Can’t believe you’re playing there again,’ was a common sentiment expressed. It was common knowledge amongst football fans that Hillsborough was unsafe and therefore totally unfit to host football matches, especially one of such magnitude.”

Nineteen year old Burnham travelled to Villa Park for the “other semi”, Everton v Norwich. Pat Nevin scored the winner for the Toffees on a day when football didn’t matter. Burnham recalls: “It was a bright and breezy day and the journey down the M6 was pleasant enough – why wouldn’t it be? It was cup semi-final day and the fans dreamed of visiting the twin towers at Wembley. 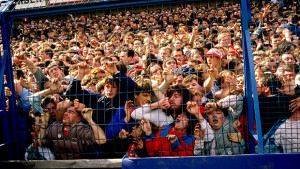 “We went 1-0 up. Naturally, there were quite a few ears to the ground, keeping a check on the Liverpool v Forest game. It was the days of no mobile phones and news travelled at a snail’s pace when compared to today. Early on into the first half the word kept spreading that something was horribly wrong at Hillsborough.

“Apprehension, anxiety and disquiet, along with spine chills, followed. The worst thing is a lot of us knew the ground was unsafe but kept a lid on our emotions until concrete news started to emanate from Hillsborough. It was unbelievably surreal. Everton’s result and the joy at reaching Wembley did not matter any more, and sombre spirits clambered back to Liverpool in shock.

“We had a get together in the pub that evening. Everybody was staggered, we were just shell shocked. Some recounted what had happened. The atmosphere was a hush and everyone was in a stupor. There was a raging fog of anger.

“Almost immediately the lies started. After all it was in an era where the powers to be knew they could get away with it. Football hooligans were the blight of British society and thugs associated with the game had contributed to ten years of bad news. They had been in the news for ten years.

“Yet, the damage caused by The Sun was incalculable. Basically, during a city’s moment of maximum grief they falsely blamed the innocents. It was nothing short of scandalous.”

In 1989, four days after the tragedy, The Sun’s front page story, headlined “The Truth”, claimed that some Liverpool fans had urinated on police officers resuscitating the dying, and that others had stolen from the dead. The report caused pervasive loathing in Liverpool. The people rose up and a boycott of The Sun still exists today, 25 years on.

In September 2012 The Sun newspaper carried a front page apology for its role in the Hillsborough tragedy and the headline, “The Real Truth”, portrayed the disclosures of failings by the ambulance service as well as a police cover up. Below the main headline it said: “We are profoundly sorry for false reports.”

The newspaper’s editor at the time, Kelvin MacKenzie, offered his apologies. He said: “I am sorry that it was so wrong. It has taken more than two decades, 400,000 documents and a two-year inquiry to discover to my horror that it would have been far more accurate had I written the headline The Lies rather than The Truth.”

The Sun journalist who wrote a story alleging drunk Liverpool fans abused victims and police during the Hillsborough disaster said he was “aghast” when he saw the headline. Reporter Harry Arnold told the BBC his story had been written in a “fair and balanced way” and the controversial claims had been “allegations”. In the programme, called Hillsborough: Searching for the Truth, Mr Arnold said: “On The Sun, Kelvin MacKenzie was the rather controversial editor at the time. He liked to write his own headlines. “He wrote the headline ‘The Truth’, and the reason I know that is I was about to leave the newsroom when I saw him drawing up the front page. When I saw the headline ‘The Truth’ I was aghast, because that wasn’t what I’d written. I’d never used the words ‘the truth’, ‘this is the truth about the Hillsborough Disaster’ – I’d merely written, I hoped and I still believe, in a balanced and fair way.

“So I said to Kelvin MacKenzie, ‘You can’t say that.’ And he said ‘Why not?’ and I said ‘because we don’t know that it’s the truth. This is a version of the truth.’ And he brushed it aside and said ‘Oh don’t worry. I’m going to make it clear that this is what some people are saying’. And I walked away thinking, well I’m not happy with the situation. But the fact is reporters don’t argue with an editor. And in particular, you don’t argue with an editor like Kelvin MacKenzie.”

We discussed the calls for standing at stadiums in the UK and Burnham is forthright in his views: “I’m not persuaded. The simple fact is that football became safe with the introduction of all seater stadia. While people yearn for those days there is a romanticism which I feel was never really there. Seating is a great leveller and it accommodates the disabled, women, men and children all equally. It’s very inclusive. It also adds accountability as it’s easier to root out bad behaviour, racism, abuse, and chucking – it can all be easily tracked to a seat number.”

New pathological evidence is due to be examined at the new inquest and Lord Justice John Goldring opened the marathon hearings with a statement to the court on Tuesday, 1st April. A potential jury of 11, plus a pool of reserves, was selected and warned that the hearings could take up to 12 months as they work through a wealth of new evidence brought to light about Britain’s worst sporting disaster.

“The Hillsborough Panel uncovered the wrongdoings,” said Burnham. “Reports and statements were altered. It was an orchestrated campaign.”

Two new investigations into the disaster are also currently in operation. One is a criminal inquiry and a probe by the police watchdog, which last week said it had identified 13 serving or retired police officers and questioned 11 on suspicion of offences including manslaughter and perverting the course of justice. No one has yet been charged with a criminal offence.

Evidence will be presented on matters relating to crowd management, the response of emergency services and stadium safety. An hour’s worth of BBC footage of the disaster which was undiscovered until recently will also be shown to the court.

“The Independent Panel gave us the truth, now we want justice,” said Burnham. “In my view those who were there were unlawfully killed. Remember, this was only four years after Bradford and safety was far from a priority. This was gross negligence of the highest order because we had a ground that did not even possess a safety certificate. I want to see individuals be held to account.

“There is a bigger picture here and which is linked by major events. I refer to the Miners’ Strike, Hillsborough and Stephen Lawrence – and each has a common thread running through, in that the victims were vilified. Hillsborough asks the profound questions about class, power and how it is distributed and how the working class are treated. The legacy to come out of all this is in the end the power will be given to ordinary people to ensure that this never happens again. Liverpool stood up united. We have stood together and will continue to seek justice.

2014-04-11
admin1
Previous: Fashion with a conscience
Next: Is government Pickle Labour’s recipe?