Don't Miss
Home / Featured / Labour: is it time for Plan B? 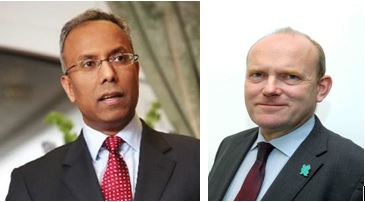 Labour: is it time for Plan B?

It was close – but not that close. Labour told us the electors had had enough of Lutfur Rahman – hated him; saw him as corrupt and divisive; would stand it no longer. How wrong they were.  Although 27,643 people gave their first preference votes to Labour’s John Biggs, 36,539 gave their first preference votes to Lutfur Rahman. Labour told us there would be a monochrome coalition (or whatever the opposite of a rainbow coalition is) of Tories and the like who would give Biggs their second preferences just to get rid of Lutfur Rahman. “Biggs: it all rests on the Tory votes” we said a couple of days ago: it did, and there weren’t enough Tories to deliver Biggs a victory.  Although Biggs took 6,500 (88%) of the second preferences, and Rahman only 856 (12%), Rahman still emerged with a majority of 3,252 – just under 4%.

The turnout this time was 47.58%; so Labour will not be able to dismiss the result of the mayoral election as the actions of an unrepresentative little clique who snuck through while the apathetic electors were napping. A General Election traditionally brings the highest turnout, as who is in national government seems more important and relevant than who is in local government. At the 2010 General Election, a 62.3% turnout in Poplar and Limehouse saw Labour’s Jim Fitzpatrick win 18,679 votes (40%) and a 62.4% turnout in Bethnal Green & Bow saw Rushanara Ali win 21,784 votes (42.9%). That’s a combined boroughwide Labour vote of 40,463.  On 22nd May 2014, John Biggs’s boroughwide Labour vote was 27,643 (68% of the previous boroughwide Labour vote) and Lutfur Rahman’s vote was 36,539 (90% of the previous boroughwide Labour vote). Where did the missing Labour voters go? It seems that some 12,820 of them (nearly a third) went to Rahman – who managed to bring out another 23,719 votes of his own (pretty much twice as many again).

How will Labour explain away this loss?  Their strategy over the last three years is in tatters. John Biggs has spent the last year drawing his GLA salary and concentrating on the Tower Hamlets part of his GLA seat: he has been an active campaigner. We have yet to see which Labour councillors have not been successful in defending their seats, but they will have to come up with a plausible explanation to their party members – and their party’s hierarchy.

Someone somewhere in Tower Hamlets Labour Party has to say enough is enough and show some real leadership.  Someone with experience and also some ability to analyse politically what has happened needs to step in and give a lead to get Labour out of the hole which its vestigial New Labour leadership has dug for it.  Already some leading local Labour figures are using the words “thanks to John for fighting a clean and honest campaign”: but more of the same will not wash. In a London where Labour made quite spectacular gains, Tower Hamlets’ Labour’s miserable performance against their expectations stands out like a sore thumb.

It is easy enough (it transpires) to be the party of the little people, the student union type personal vendetta politics.  It is harder, but necessary, for Labour to ask itself “is it possible we were wrong?” If Labour and Tower Hamlets First were to unite in his borough, the Tories could be swept off the map of the borough and the labour family could once more be reunited to defend and extend our people. Is that too much to ask?  The people have spoken. Is Labour listening?

2014-05-24
admin1
Previous: Almost still alive at the Count
Next: Labour’s McCurry’s in a right stew