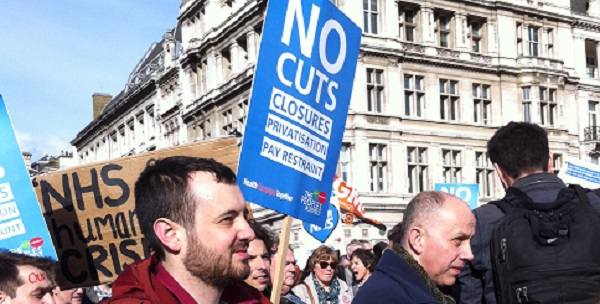 Campaigners have been fighting for the NHS to receive proper funding, to keep up levels of service.

TORY GOVERNMENT should be “deeply ashamed” of the latest figures which show that record numbers of patients have been left waiting in ambulances, unable to gain admission to hospital A&E departments this winter – according to Jeremy Corbyn’s Labour Party.

Labour’s Shadow Health Secretary Jonathan Ashworth MP came out with this indictment today, after research conducted by the BBC revealed that 75,000 people have experienced this callous extra wait, just when they are most in need of being seen by medical staff.

The research applies to England only and covers the last six weeks of 2017. The NHS also reports difficulties in Wales, where some operations have been put back, and in Scotland, where an increase of one fifth in the number of A&E cases compared with the same period last year has seen an increase in waiting times.

Patients arriving at hospital by ambulance are supposed to be seen by hospital staff within 15 minutes of arrival. The BBC says 75,000 patients waited for at least half an hour and 17,000 waited over one hour – with the worst cases waiting up to five hours in an ambulance.

Jon Ashworth said, “Labour and clinicians have warned Ministers for months to prepare for this winter, but concerns were casually dismissed out of hand. Theresa May’s boast that the NHS is the best prepared it’s ever been has now been entirely discredited.

“The truth is we are now approaching the 8th year of desperate underfunding and cuts to our health and social care services by the Tories. We’ve seen thousands of beds cut from the NHS and the numbers of days lost to delayed discharge are up by 50% since 2010. The NHS is being pushed to the brink under Theresa May and it is patients suffering as a consequence.”

Ashworth’s words come hours after Theresa May had to apologise to the nation for the poor state of the NHS this winter, which has meant that booked appointments have had to be cancelled so that the NHS can cope with flu and other seasonal emergencies. It is thought that at least 50,000 operations have been postponed in England alone.

Twelve Hospital Trusts in England have admitted that they have “100% bed occupancy” – meaning they have no free beds for emergencies, which is twice the level of last year. NHS managers claimed that the figures show the pressure the NHS was under, blaming increased demand for health services for the delays, rather than lack of planning. They did not mention the funding situation.

2018-01-04
admin1
Previous: Lorry kills pensioner in East Ham
Next: Who are the Barking con artists?