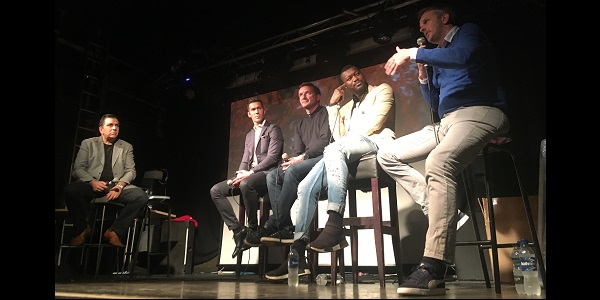 IT TURNED OUT to be a great weekend for Liverpool Football Club in London as the Reds hammered West Ham United at the London Stadium in their Premier League encounter.

Following the match, four legends from the team which graced the Champions League Final in 2005, met fans to re-live the greatest Champions League final ever, when Liverpool lifted the famous trophy for the fifth time.

5Times brought Luis Garcia, Dietmar Hamman, Vladimir Smicer and Djibril Cisse to London, where fans had the chance to shake hands, get their autographs and pose for a photograph with their heroes. That done, the Legends took to the stage to deliver some of the stories of that astonishing night, the miraculous journey to get there and all the highs and lows – of one of the greatest achievements in the club’s history.

The night commenced with a vociferous tribute and celebration of the life of Mr Liverpool Ronnie Moran who sadly passed away in March. The quartet then re-lived many memorable and often hilarious accounts of the night the mighty AC Milan were humbled in one of the most astonishing football comebacks ever. Liverpool came back from 3-0 down at half time to claw back the deficit in six minutes of second half frenzy – eventually going on to lift the trophy after extra time and a dramatic penalty shootout.

There were thoughts and assessments of the game and the emotions, as well as funny anecdotes which had the punters rolling around in tears and video replays of the highlights of the 2005 final. Hans Soky from LFC London said, “London is buzzing tonight. We have followed up a tremendous morale boosting win against West Ham United and ended a perfect footballing weekend with these four legends entertaining the gallery. The crowd could have easily stayed and listened to their stories all night.

•5Times events Ltd organises many different types of event that bring Reds fans closer to some of the legends they used to watch at Anfield. Proceeds from a number of special events organised by 5Times are distributed to charities close to the heart of the players and to the Liverpool community. With special thanks to Hans Soky of LFC London and Brendan Wyatt. For more information about 5Times, go to:
www.5times.co.uk