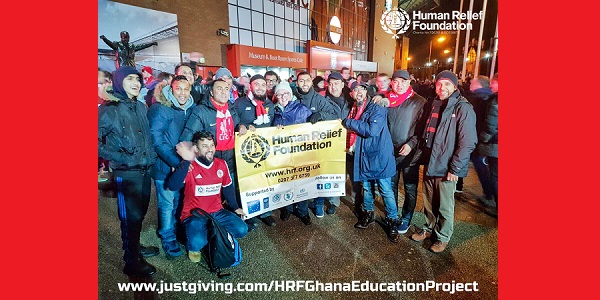 A VISIT TO LIVERPOOL was a well earned trip for a team of Whitechapel charity volunteers travelling to Ghana after completing the construction of a school and sports complex.

The new facilities will be used by children and young students at the Bamvim Presby in Tamale and the Timtooni Football Club, Talon, in the northern region of Ghana.

Although Jurgen Klopp’s men lost the home tie 3-2 against the Premiership strugglers, the fans had a great FA Cup day out. At Anfield the team were joined by a travelling group of Luton and Birmingham Reds as well as season ticket holder Janet Hodge, who is affectionately known as Bootle Jan.

Travelling to Ghana are Abu Nasir, who is accompanied by Khoyrul Shaheed from the Human Relief Foundation; Abdal Ahmed from the Tower Hamlets Youth Sports Foundation; Abdul Hannan of Brawlers Boxing; and Emdad Rahman MBE from Stepney FC. The four coaches are on a deployment mission and will be delivering sports and education activities as well as facilitating a sports day for the students of the school.

Abu Nasir commented, “Liverpool Football Club is a global institution based on community values. We are all proud Reds who frequently attend games. We’re really pleased to have been able to give fans from a diverse range of backgrounds an opportunity to watch their beloved team together whilst helping to raise awareness of a great cause.”

Khoyrul Shaheed from HRF added, “This Project is nearing completion and on behalf of HRF I would like thank our four coaches and Liverpool Football Club for an amazing experience. The result wasn’t great – but it was still a great day out.”

•To donate, go to:
www.justgiving.com/hrfghanaeducationproject

2018-01-30
admin1
Previous: Row breaks out over student funding
Next: Students: better off with Labour