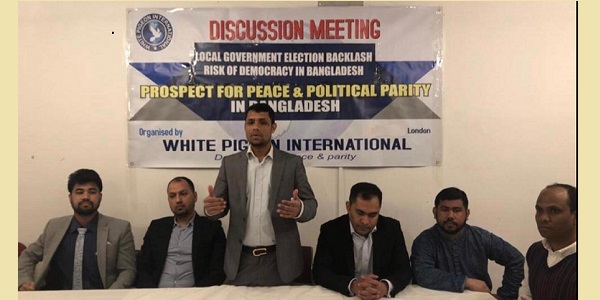 Speakers at the discussion meeting said that the democracy of the recent local government elections held in Bangladesh was questionable, as most of the candidates are supporters of the current regime and very few of them were from non-major opposition groupings. This local election clearly identifies that the current political crisis has proven to be a risk to democracy in Bangladesh once again.

In the meeting, speakers pinpointed the fact that many candidates have already been elected as Chairmen and Vice-Chairmen of the local government elections without any contest, and the citizens of the country been deprived from exercising their right to vote. Also, the speakers said that the recent local government elections in Bangladesh were a reflection of the one-party election – which is completely undesirable.

They also said that – as happened during the parliamentary elections of 30th December, 2018 – some presiding officers and assistant presiding officers have been arrested in connection with ballot and vote rigging the night before the 2019 local government election polling day, but many more people involved in the Government’s politics had not yet been arrested and remained untouched, despite being involved in such irregularities.

The meeting also heard that the many seats were not contested and the level of spontaneous participation in elections in Bangladesh had been found to be absent from the recent local government elections as well. 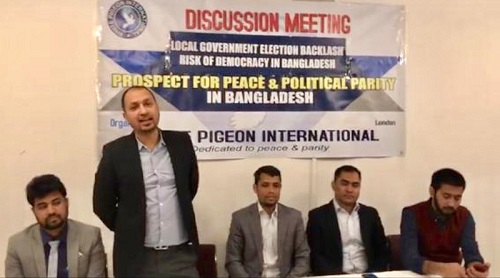 In the meeting, a fair election system was described and speakers said that the election commission failed to follow the rules and procedures which should have been taken. As a result, Awami-backed candidates are going to be elected unopposed – echoing the practices seen at the last one-party, staged, national election at local government level. Blame was laid at the feet of the current government of Bangladesh.

The question put to the audience was how local government elections could inspire voters to come out and exercise their right to vote freely, without ensuring the participation of opposition candidates? The answers lies with the Election Commission and the government institutions.

The WPI’s Chair, Mohammed Ala Uddin, said in his speech that enthusiastic participation in elections, whether General local government elections, is a measure of the democracy practised in that country. Sadly the current government of Bangladesh failed to attract opposition parties to stand in the election, and hence when the citizens of the country turned out at the polling stations, they found there were no candidates standing for the party they supported – and they had to turn round and come home again. Uddin exemplified the importance of mass participation strategies by detailing a series of initiatives by the election commission which had been absent from the recent local elections: this absence resulted in fewer public representatives of the constituencies.

Uddin also said that local government elections should be arranged in a country in order to protect democracy, the rule of law and the rights of its citizens to have a true taste of democracy. However, the present Government and election commission of Bangladesh either failed or did not wanted to let people vote for the opposition candidates in the election – which is not in line with democratic practice.

2019-04-04
admin1
Previous: May begs Corbyn to bail her out on Brexit
Next: A story of love under the shadow of war