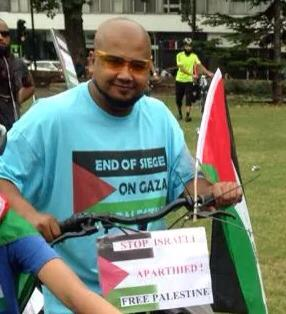 Tragedy hit the East End on Monday night when a cyclist was killed as a car collided with his bicycle. Eye witnesses saw the car being driven fast and carelessly, possibly in a race with anther vehicle, just before the collision – accounts which appear to be corroborated by CCTV. Within 24 hours, police had arrested a man whom they believe was driving the car involved in the collision on suspicion of causing death by dangerous driving and failing to stop at the scene of a collision. The 21 year old suspect was then released on bail until mid-January.

The incident took place just after 10pm on Monday, 24th November at the junction of Commercial Road (the A13) and Cavell Street, just outside the Holiday Inn. The car did not stop at the scene, but sped away. The incident is being investigated by Metropolitan Police Officers from the Serious Collision Investigation Unit – who closed the road until midnight while they carried out the first part of their on the scene investigation. Police quickly found what they believe to be the vehicle involved in the incident, a white VW Golf, but no driver was present when it was discovered.

The cyclist who was involved in the collision was immediately taken to hospital but died of his injuries shortly after arrival. He was described as a 32 year old man. His name has not been released by the police to date, but they confirmed that his next of kin have been informed. Local sources, however, named the victim as Asaad Ahmed, a primary school teacher and father of two who lived a couple of minutes away from the scene of the accident. The day after the killing, family members assembled at Mr Ahmed’s home, stunned by the news. Mr Ahmed’s brother Akthar told the press, “It’s so raw still.”

Eye witnesses quoted in the press include local resident and taxi driver Nasher Ahmed, who said: “He was trying to cross the road on his bike when he was hit by the car that was racing the other. He was a real nice guy and had two young children, it’s very sad. He was just on his way home. His wife and brother went to hospital with him in the ambulance. As soon as the driver hit the cyclist he just did a U-turn and drove away. He didn’t even stop.”

Neighbour Nahim Ahmed, 22, also spoke out, saying, “He was a good person, caring and a great father. He had a new born son and a young daughter, who he really doted on. He was really part of the community, just a really good guy.”

A police spokesperson said: “Officers were called at 10.08pm to reports of a car being in collision with a cyclist. The vehicle that collided with the victim is believed to have been racing with another car when the incident occurred. A 32-year-old, male cyclist was in collision with a car that did not stop at the scene. The injured man was taken to an east London Hospital where he later died. A car that was suspected of being involved in the collision has been located but officers would still like to hear from any witnesses to the incident.”

This latest death brings the number of cyclists killed on London’s roads this year to eleven. Since this latest accident, local residents have spoken out about the number of young drivers who have made a sport out of racing their cars down Commercial Road. We need police and the Council to work together to stop this very dangerous practice.

Cars in real life are not playthings on a video game, and drivers who race each other on urban streets have to realise they are risking the lives of other people as well as their own. If the facts are confirmed in this case, the driver should be charged with murder – even though it is more common for the police to use lesser charges such as “causing death by dangerous driving” in these kinds of circumstances.

The Metropolitan Police are appealing for anyone who witnessed the collision to come forward. Anyone with information is asked to call the Serious Collision Investigation Unit at Chadwell Heath on 020-8597 4874 or call Crimestoppers anonymously on 0800-555 111.