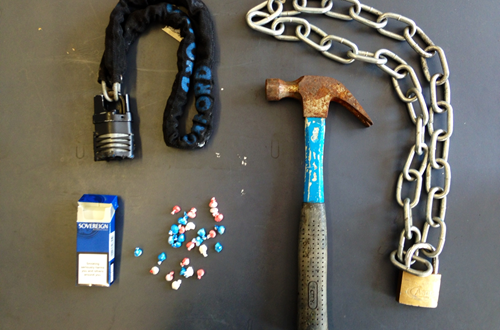 Tower Hamlets Council continues to strive to arrest a “dealer a day”, with officers carrying out further stings in Stepney and Isle of Dogs this month. The recent raids have led to the seizure of heroin, cocaine and cannabis with a street value of over £6000.

Lutfur Rahman, Mayor of Tower Hamlets, said: “I know that residents want the council and police to work together to stamp out drug dealing and bring drug dealers to justice, and these latest raids and patrols are part of our continuing efforts to do just that.”

On 28th July, police officers from the Partnership Task Force (PTF) were on patrol in the area of Trafalgar Gardens in Stepney E1 when a local resident approached them with concerns about youths loitering in the children’s park. The officers patrolled the park and moved several people on, before completing a “sweep” of the area during which they found several potential weapons and a blue cigarette packet containing 28 wraps of heroin and cocaine hidden in the bushes (pictured).

On 1st August, PTF officers executed a drugs warrant at Dartmoor Walk on the Isle of Dogs E14. After entering the property, officers carried out a search and found £6,000 of suspected class A drugs in a safe, along with a quantity of Class B drugs and cannabis. A suspected dangerous dog was also seized by police dog handlers. Three men were arrested in connection to the alleged drugs offences and were taken to Bethnal Green police station where the investigation continues.

Also this month, Tower Hamlets Enforcement Officers (THEOs) have continued sniffer dog drugs patrols in areas which residents have highlighted as drug dealing hotspots. Most recently the patrols have resulted in the detection and seizure of two quantities of cannabis – in Cruse House, Poplar High Street, E14 and Kerry House, Sidney Street, E1.

Under the “dealer a day” initiative, the council and police commit to working together to arrest at least 365 drug dealers every year – amounting to at least one every day.

The PTF is a council initiative under which the council funds extra police officers, and tasks them to tackle key issues of importance to residents such as drugs, gangs and vice.

Residents are encouraged to report drug dealing and misuse, or any suspicious activity, to the police non-emergency number on 101.

2014-08-13
admin1
Previous: Volunteers needed for drama festival
Next: Do battle with dragons and Minotaurs this summer!