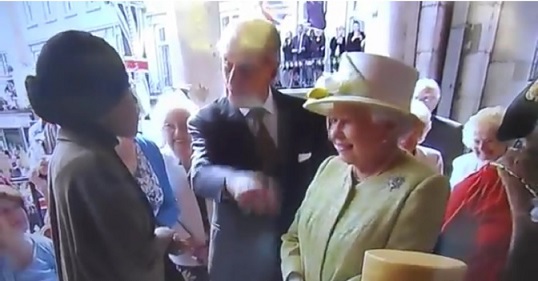 Nadia’s cake: fit for a Queen!

It was a proud moment as Nadia’s brightly coloured, three tiered birthday cake stood waiting for the Queen. It was not just that it was (by the look of it) a jolly good cake. It was also that Nadia’s presence on the podium next to it brought a British Bangladeshis to the heart of the UK’s celebrations of its monarch’s birthday.

The Queen and Nadia had a chat over the orange and purple extravaganza – perhaps comparing recipes. Then the Queen cut into the cake as the crowd around her broke into a round of “Happy birthday” as they waited for their cake.

At this point the Duke of Edinburgh arrived. Was it to be a classic moment? Was he going to come up with one of his “unfortunate” comments? All seemed well, as he too fell into conversation with Nadia. They gesticulated at each other – and as Her Majesty turned back from the cake, her husband came very close to poking her in the eye. Showing she still has quick reactions, she jolted back – although her face fell.

Coronation chicken was invented for the Queen’s Coronation Banquet. Perhaps “Orange Drizzle Nadia” will become a classic too.

As for Nadia herself, she had confessed beforehand that she had thought the original approach to bake the Queen’s birthday cake was a joke. Was she nervous at the thought of meeting the Queen, once she had been convinced it was a genuine invite? No. Not a bit. The Great British Bake-Off had prepared her not only to bake a good cake but also not to be daunted by meeting famous people. Once you’ve looked Paul Hollywood in the eye, apparently, meeting royalty’s a doddle!