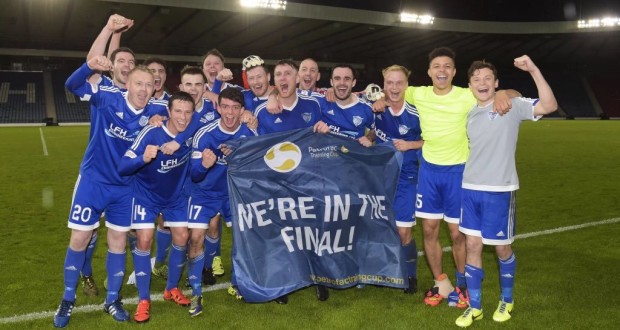 A first half winner from Leighton McIntosh at Hampden Park was enough for Peterhead to reach the first senior cup final in their 124 year history. The game started after a minute’s silence in remembrance of and solidarity for the lives lost in Friday’s atrocities in Paris.

In this Petrofac Training Cup semi-final clash against Queen’s Park, Rory McAllister put the visitors ahead from a well executed free kick. Having scored in every round of the competition this season, this was the Peterhead forward’s eighth goal in the cup and 18th of the season to date. Queen’s Park rallied and at the half way point of the first half Paul Woods squared matters with a precise penalty. The home crowd roared their approval, but within minutes McIntosh grabbed what turned out to be the match winner.

As the Spiders fans grew restless, Queen’s Park rallied in the second half but failed to capitalise. Late in the game Jamie McKernon was shown a red card to complete a miserable afternoon for his side. Among the 917 fans who attended, the vocal Blue Toon contingent celebrated with much mirth. The team from Balmoor will now play Rangers or St Mirren in the final next April.