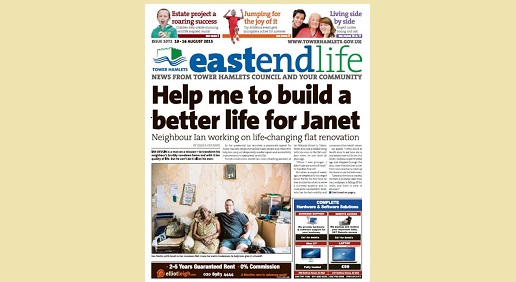 When Judge Richard Hawkins sentenced 17 year old Ian Devlin to nine years imprisonment for the racist manslaughter of Shiblu Rahman, he took the unusual step of allowing the killer to be named, even though he was under 18, saying that the crime was so serious that the public had a right to know who did it. That was in 2001. Today, the Independent news-website has claimed that Ian Devlin, now in his 30s, is working at a local school.

The school in question is Ian Mikardo school – a special needs school for boys who are assessed as having emotional and behavioural difficulties. The school and its pupils featured in a TV documentary two years ago. At the time, some of the pupils were portrayed as having experienced distressing incidents such as domestic violence or even murder. No one suggested at the time that a member of staff might have been doing the killing.

It was late 2001 when three young men were convicted of charges arising out of the killing of Shiblu Rahman in Bow. Stephen Hansen of Poplar, who was aged 15 at the time of the incident, was convicted of murder. He had a knife and appeared to carry out the fatal stabbing and the Judge said he was satisfied that Hansen intended to kill his victim. Handsen received the mandatory life sentence (expressed as “indefinite detention”, because of his age), with a tariff of 13 years.

Terry Cooper, aged 18 and from Bow, and Ian Devlin, aged 17 and from Poplar, were convicted of manslaughter. Each was sentenced to nine years imprisonment. Although they had not stabbed Mr Rahman themselves, Judge Hawkins pointed out that they had been part of the attack and had persisted knowing that Hansen had a knife. He was in no doubt that they shared responsibility for the death.

The Court had heard that the three attackers called Mr Rahman a “Paki” as he was stabbed in his front and back. Judge Hawkins said that he was in no doubt that the attack was racially motivated and he took that into account when determining their sentences. All three defendants had denied having a racist motive, though it was also reported that Mr Rahman had been subject to racial abuse from local youths in the run up to the attack (and, ironically, had decided not to confront the abusers).

Mr Rahman was attacked as he returned home from work as a chef, and managed to drag himself home. His family called an ambulance but claimed that it had taken too long to arrive and Mr Rahman might have been saved if it had arrived sooner. Mr Rahman, who was aged only 34, had said “Why me? What have I done to you?” as he was attacked. Judge Hawkins said that the evidence had shown that Mr Rahman was a hard working and popular man, and a loving husband and father to his two children, aged four years and five months. He endorsed the family’s call for an inquiry into the length of time the ambulance took to arrive.

Today’’s report in the Independent makes it clear that they are not alleging that Devlin has hidden his background from the school. It says that the school took advice from HR professionals on whether the conviction was spent under the Rehabilitation of Offenders Act. However, perhaps we should not be surprised that the report, given that it is written by Ted Jeory, should bring local politics into the story – and mention Lutfur Rahman.

The report says that Devlin’s appointment “had to be confirmed by the school’s governors”. This is not unusual, as hiring staff has been a matter for schools for many years and the Local Authority has no power whatsoever over which employees schools take on. All employment decisions are taken by school governing bodies – though in some cases the decisions are delegated to sub-committees of the governing body.

The Council did make this division of responsibilities clear to the Independent, telling it that parents of children at the school should speak to the “headteacher or Chair of Governors if they had any concerns.”

The Independent report goes on to allege that “three of the governors were senior local Labour Party officials, it is not clear if the controversy was flagged up to the council’s education chiefs”. It does not name the three “officials”. Again, this is a slight misnomer as the local Labour Party has no officials as such: it has some paid administrative staff from time to time, and otherwise its leadership consists of elected and unpaid officers, not officials.

The Independent report then quotes “Mayor Biggs’s allies” has having told them that Devlin was hired under Biggs’s “predecessor, the now-disgraced Lutfur Rahman” – before adding “there is no evidence he was aware of the decision.” Of course he wasn’t. Hiring school staff is a devolved matter which schools do. In any event, it is strange that “allies”, who usually express concerns that Lutfur Rahman did too many favours to Bangladeshi people, should now be suggesting he did a favour to a man convicted of racist manslaughter of a Bangladeshi man. Hurricane Irene caused damage in the Caribbean while Lutfur Rahman was Mayor of Tower Hamlets: there is no evidence he was responsible for that either.

The Independent report suggests that the community has only just found out that Devlin has been working at the school – despite Devlin being featured in the Council newspaper East End Life in August 2014 (just after John Biggs took over as mayor of Tower Hamlets – though there is no evidence to suggest Biggs was aware of Devlin’s background). It goes on to say that there are local calls for protests to be staged urging John Biggs to investigate. As John Biggs has no power over school appointments, which national legislation clearly states are a matter for schools themselves, John Biggs would find it hard to investigate. He has no power to set foot inside a maintained school (unless invited), and certainly no power to commandeer documents or question staff.

Worries have, the Independent reports, been countered by the school’s headteacher, who has told the Independent that Devlin has worked at the school for five years and she is satisfied with his performance as a rehabilitated offender. She appealed for calm in the community, in the hope that any protests would not disturb the vulnerable pupils.

Indeed. The troubled pupils at Ian Mikardo school, and the staff who have done very well getting them back on their feet, deserve to see calm and mature responses from the adults around them in this difficult situation.