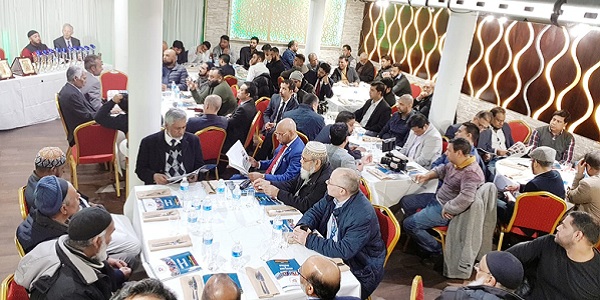 RAMDHANA IS A quaint and charming village which stands along the Pachla river in Bishwanath, Sylhet. The natural colour and vibrancy of the surrounding picturesque landscape permeate this humble Bangladeshi village.

A common practice among the Ramdhana expatriate community is to come together to support the local villagers. It was their continuing love for their homeland, combined with their own personal success, which resulted in the formation of the Ramdhana Welfare Trust UK (RWTUK), in 2011 to support the development and stability of those in need within the locality.

The charitable organisation has since continued to make notable differences in the lives of the locals by providing basic necessities like food and shelter. Apart from this the community has introduced the well project to provide fresh clean water for residents, along with items such as school uniform and stationery. It has organised the distribution of Eid gifts distribution alongside supporting relief projects in Sunamganj and for the Rohingya in Cox’s Bazar.

RWTUK recently held an event for all those involved in its work. Chair Faizul Haque welcomed guests before speeches were given by Vice Chair Afraj Miah, General Secretary Junab Ali, Treasurer Mashuk Ali and Assistant General Secretary Muhammed Ali. He said, “Our strength is our great unity and I would like to welcome guests and congratulate all our volunteers for the amazing work day in, day out. We are a small group of people with big hearts.” 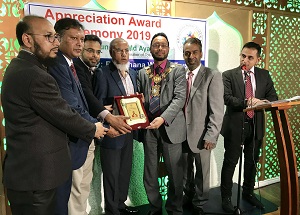 Chief guest was Councillor Ayas Miah, this year’s Speaker of Tower Hamlets Council. He commented, I’m proud to be here this evening and I would like to request everyone to take some responsibility to support those in need. This is a fantastic initiative and awards evening and I thank you all for your efforts.”

Attendees were also able to watch a brief documentary highlighting the excellent works of RWTUK in helping curtail poverty through Ramadan aid distribution and helping to provide clean water, medical aid, financial assistance for couples who are getting married, medical aid and support for orphans.

The highlight of the evening came when the Ramdhana Football Club celebrated after their triumph in the Union Cup, which was supported by Bishwanath Aid. An awards ceremony was conducted, during which each of the Ramdhana Union Cup champions was presented with a winners’ trophy by notable community activists hailing from the region.

The final award of the evening was presented to trustee Mark Wade, who concluded, “I feel very humbled by this recognition. My contribution is very small in comparison to the great efforts put in by everyone for the development of the welfare of the people of Bangladesh. Congratulations to you all.”

The event was hosted by poet Minhaz Khan. Special thanks were due to Debbie Collins, Ben Kerr, Terence Ralph, Joe Taylor and David Green.