Don't Miss
Home / Blog / Sadiq gets it right on Trump 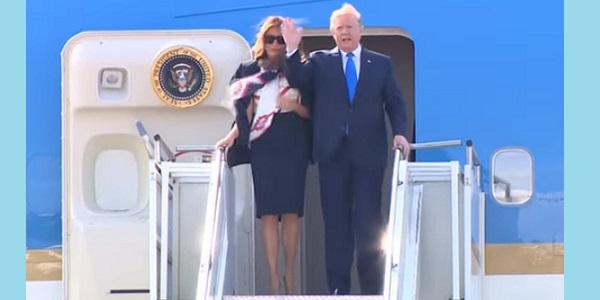 Donald and Melania Trump arrive in the UK at the start of their state visit.

Sadiq gets it right on Trump

HE DOESN’T always get it right. He has allowed architectural vandalism on Fish Island in Bow and equivocated over giving tenants power to resist developers making a profit out of them. But on Donald Trump’s state visit to the UK, London Mayor Sadiq Khan has got it right.

Back in December 2015, when Trump was a candidate for the US presidency, he called for “a total and complete shutdown of Muslims entering the United States until our country’s representatives can find out what is going on.” Trump aides and supporters have watered that statement down since, referring to the measures Trump took when he became president as a “travel” ban rather than a “Muslim” ban. The US Courts have ruled that a president cannot be held accountable for things he said as a candidate.

None of that removes the point that Trump called for collective punishment of innocent people on grounds of their religion. Khan, who is a Muslim, is rightly offended – as are the Muslims and non-Muslims across the UK who demonstrated against Trump today and will do so tomorrow. In declaring Trump persona non grata, Khan is standing up for Muslims who are in the front line of Trump’s discriminatory values and for every else who finds this rhetoric abhorrent.

Sometimes it can be difficult to tell if someone is being Islamophobic. A good way to test their statement out is to re-read it with the word “Jews” replacing the word “Muslims”. If Trump had called for Jews to be prevented from entering the USA, he would have been rightly condemned by most of the world’s leaders. Muslims deserve similar courtesy. 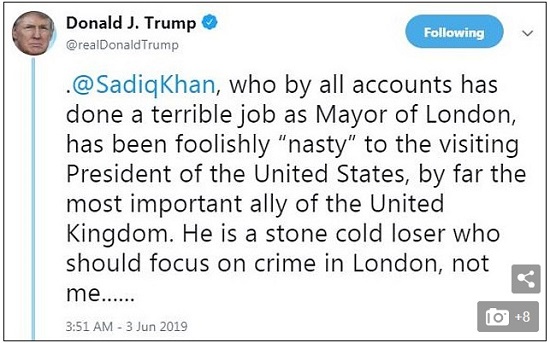 Right wing commentators have muttered in the UK press about how discourteous it is to protest against Trump because he is here ex officio, as president – not as an individual. But the fact that voters in another country have elected Trump does not mean that we in the UK have to approve of him.

Right wing commentators have suggested that it is not fair to protest against Trump – because there were no similar protests against other leaders with dubious human rights records. That absence of protest was not for want of trying – and there are thousands of people who would gladly take up the challenge and protest a bit more. Was the sanctimonious Piers Morgan out on the streets protesting the last time a representative of homophobic Russia came on an official visit? No. He is a serial armchair commentator, not a journalist devoted to fairness.

Right wing commentators have warned that we should be nice to Trump because we need a trade deal from him. Yes: businesses based in the US want to take over our NHS and sell us chicken soaked in strong chemicals from half way round the world – all to make profits out of us. That’s not the kind of trade we need.

For once Sadiq Khan has got it right. As have other Labour MPs, who will be joining the protests tomorrow. Why don’t you join them?

Together Against Trump national demonstration
11am, 4th June, Trafalgar Square

For further information, go to:
https://www.stoptrump.org.uk/

•Read more about it:
Trump to get his state visit to UK
Tower Hamlets says Dump Trump!