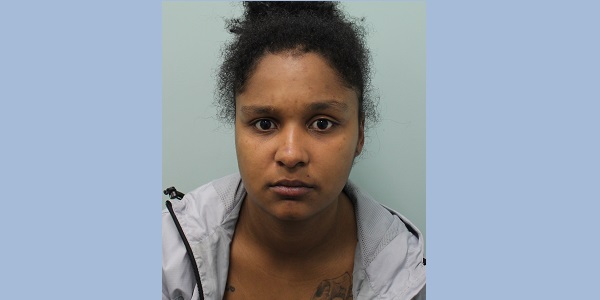 She robbed and bit OAP woman; now she’s in jail

IT’S JAIL FOR MONIQUE ROACH who carried out a cold hearted and violent attack on a 75 year old woman who was at her home in Dalston Lane, Hackney, on 28th March.

Roach, 24, or no fixed address, knocked on her victim’s door at around 11.30am. She was crying, and asked her victim for £10. The woman tried to close the door, but Roach stopped her – bit her hand, took her wedding ring and ran off.  The shocked victim contacted her daughter – who rang the police.

Police were able to identify Roach from nearby CCTV and from a palm print she had left on the victims’ front door. They were able to trace her to an address in Rendlesham Road, E5. She was arrested on 17th April and charged on 29th April.

Police then considered how to get the victim to identify Roach as the woman who had attacked and robbed her. London was on lockdown and the victim was 75: she couldn’t go down to the police station to take part in a conventional ID parade.  The police did not want to delay the case going to court, as they feared that would give Roach time to commit further offences.

Police decided to take the identification centre to the victim’s home. An officer put on protective clothing so that he could take materials into her house while remaining socially distanced from her, and then he explained the process to her through the window. The victim identified Roach as her attacker.

Roach committed a further offence on 13th April, against a man who lived in Spenser Road, Hackney.  A few days earlier, she had conned the man into giving her money. On the second occasion, she entered his home and demanded more money – or she would call the police and allege that he had hit her. The victim handed over the money – but then called the police as soon as she left.

The Investigating Officer, Detective Constable Jack Downey from the Central East Basic Command Unit, said: “This was a callous and heartless robbery whereby Roach targeted a vulnerable lady in her own home. The violence she used left the victim terrified and fearing for her safety, at a time of significant uncertainty as we all navigated our way through Coronavirus restrictions and risks.

“We did not let the challenges posed by the coronavirus pandemic stop us from effectively investigating this case. I am grateful to colleagues across the Met who made the identification of this suspect possible and also want to praise the bravery of the victim who – at a time where she felt incredibly vulnerable due to the risks posed by Coronavirus – allowed us to support her through this process. I am pleased that Roach has been brought to justice for this brazen crime.”