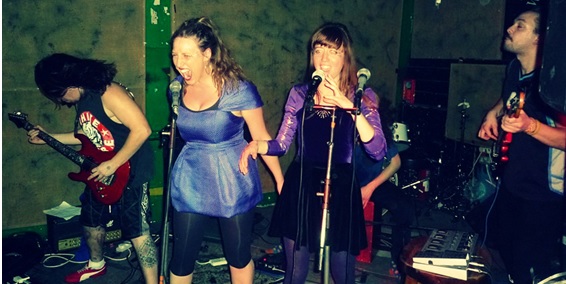 Whatever it is, Poeticat is not a shy, retiring and conformist band. Ask them to describe themselves, and you’ll get salvos such as: “With roots in London and Lisbon, Poeticat is an energetic and unique rock band infusing elements of progressive, experimental and psychedelic music with a punk attitude. They are here to play music to jump up and down to, and explode guitar riffs in your face with all the class of a 3 year old dancing to Metallica.”

Who goes to see them, then? “Their fans are made up of weirdos, trendies, outsiders, punks, feminists and hippies and you can’t tell who is who. Once you enter the Poeticat kingdom you all come out looking the same; sweaty, dumfounded and united in your belief that this music is the way forward. This is a movement of revolutionary thinkers and music makers and all are invited in join.”.

Ask an outsider to describe them, and you’ll get comments such as these, from Hugo White of The Maccabees: “A uniquely individual and odd group, creating original music that defies any genre and creates its own.”

The facts are that Poeticat is taking a ten date tour of key London venues this September, with support from Mind of a Lion, Hana Piranha & Boss Terror. They are promoting their new EP Smash the Floor. Plenty of the venues are in East London. If you want an unusual and unconventional experience, try them for yourselves. If you really can’t make a show, or to get a sneak preview, check out www.poeticat.co.uk .

Look out around London for their Smash the Tour bikes placed in secret locations near each venue. Send a picture of the bike via twitter, facebook or instagram to the band and win a prize.