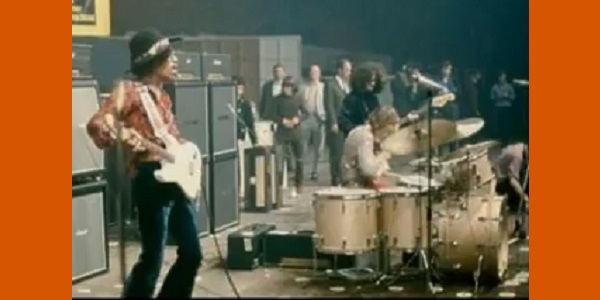 Matthews Southern Comfort stayed at number one with Woodstock for a calm and dreamy three weeks – a calm which was shattered by the arrival of Voodoo Chile from the Jimi Hendrix Experience, which reached number one in the UK on 17th November 1970.

It’s a beautiful juxtaposition: two aspects of the 60s, the hippies harking back to folk and the young rebel with his Blues-influenced innovative rock. The emergence of Voodoo Chile – album track, single and improvisation for a passing documentary – from a studio jam session in 1968 is well documented and too long in detail to repeat hear. Suffice it to say that the album track was released as a single two years later and because one of Hendrix’s most famous numbers.

The life and career of Jimi Hendrix is also well documented. Born in the USA, his career took off commercially when he moved to the UK – with the US catching up by his third album. Tragically, it was all too late. That was the last The Jim Hendrix Experience album and was followed by a live album, in the name of the Band of Gypsys, and live and studio material collected and sold posthumously. Hendrix, often thought of as the greatest and most influential rock guitarist ever, died of asphyxia, having taken an overdose of sleeping tablets – at the tender age of 27, after an active career lasting just four years.

There aren’t many videos of tracks recorded 50 years ago. Here’s a live recording of Hendrix playing the documentary version of Voodoo Chile in Sweden in 1969. Afficionados may wish to search YouTube for audio-only recordings.