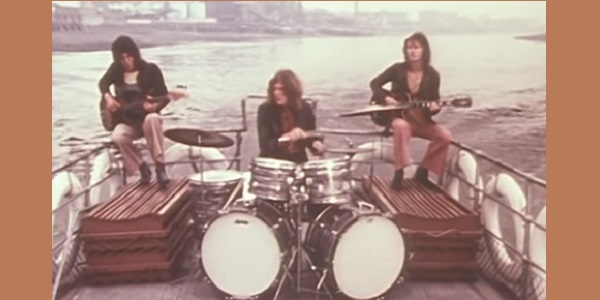 We’re beginning to leap ahead of ourselves now, after the first few number 1s of 1970 occupied the charts for more than a week each. Now, however, we take a look at a one week number 1: Yellow River by Christie. It was written by Jeff Christie and offered to the Tremeloes – who did actually record a version but then turned it down as “too poppy”. As is customary with pop history, there are at least two versions of what happened next. What we know for certain is that the song was released with Jeff Christie’s own vocals, and then performed by a band named “Christie”, whose drummer was the brother of a Tremeloe

Yellow River became the new band’s first hit, reaching number 1 in the UK on 2nd June 1970 and doing well in other countries too. It was their only major hit. They made some appearances in the charts for a couple of years and the band continued in name but with an ever changing line up. Jeff Christie kept the band going until 1982. After an extended hiatus, it re-formed and last released music in 2012.

Although it was only at the UK top spot for a week, Yellow River has remained a classic – one of those songs you recognise when you hear it. It’s a catchy tune, but musically it belongs to 1960s rock rather than 1970s pop.

Another feature of the 1960s, rather than the poppy 1970s, is that no one really knows what it’s about. Jeff Christie has said that it was inspired by the idea of a soldier going home after the US Civil War – but that may well have been a misdirect. The song was released as the US was waging war in Vietnam, and anti-war songs were officially frowned upon. It is certainly possible to read the lyrics as referring to Vietnam – though that seems a bit facile and the conclusion that comes from associating “yellow” with China and its neighbours, which today would make us uncomfortable. Perhaps it is best just to think of it as an anti-war song, in which the beauty of place and partner are tinged with an overlay of distance and death.

●There’s an interesting interview with Jeff Christie with more information about Yellow River and the pop industry at the time, given to mark the 50th anniversary of the track’s release. It is available here:
Interview