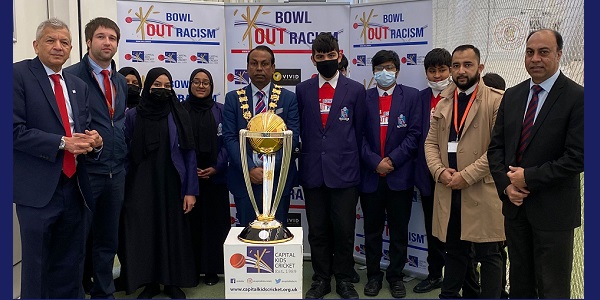 WELL KNOWN figures from the world of cricket and beyond queued up at the launch of the Bowl OUT Racism campaign to welcome and endorse the initiative. The launch took place at the MCC Academy at Lord’s on 28th January.

They were joined by 50 children from four of London’s state schools, who took part in some practical cricket activities. The campaign aims to ensure that children like these can all enjoy cricket – while they are at school and also in later life – in an atmosphere of mutual respect, without having to tackle the kind of institutional racism that has been featured in the disclosures of various professional cricketers in recent months.

The idea for a campaign came from Capital Kids Cricket and it is supported by the England and Wales Cricket Board (ECB), the Mayor of London’s Office, the Marylebone Cricket Club (MCC) and various County Cricket Club – with additional support from Vivid Solar Lighting. The partners will now focus on education, raising awareness of racism and promoting equality and respect, on and off the field. Speakers at the campaign launched highlighted why they welcomed the launch of this campaign.

●Shahidul Alam, CEO of Capital Kids Cricket, welcomed everyone to the launch, saying “Since the beginning of our journey in 1989, Capital Kids Cricket has always been a diverse cricket organisation, working with the most disadvantaged children and young people across London. The ICC CWC2019 Trophy is here [at the launch] as a symbol of unity and inspiration of positive energy. We will work together to root out racism and discrimination through education and awareness.”

●Tom Harrison, Chief Executive Officer of the ECB, said, “We are committed to driving discrimination out of our sport. We welcome the Bowl Out Racism campaign being launched by Capital Kids Cricket, which will engage young people with cricket in schools across London. Education has a vital role to play in making cricket the inclusive, welcoming sport we want it to be, and by working together across the whole game I am confident we can achieve real and lasting change.”

●Unmesh Desai, a Member of the London Assembly, said, “I am delighted to be at Lord’s to support the launch of Bowl Out Racism at the home of cricket and support the work of Capital Kids Cricket. I am pleased to see that the ECB and the London cricket boards are supporting the launch. Education is the key to combatting hate and discrimination. I hope today’s initiative will do this, and the start of the cricket season features ‘Bowl Out Racism’ messages at every cricket ground! From the London Assembly I will do everything I can to support Bowl Out Racism!” 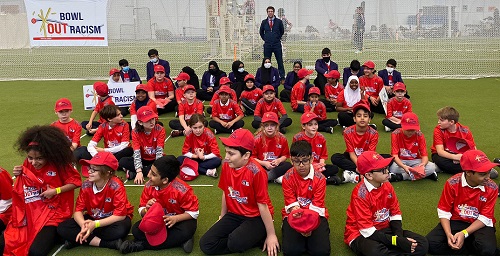 Keen children took part in cricket activities during the launch.

●For more information about the Bowl Out Racism campaign, including how to join up as an Ambassador or Campaigner, go to:
Bowl OUT Racism

2022-02-02
admin1
Previous: Fire breaks out in Aberfeldy Village
Next: The Council’s fighting Covid – one test at a time