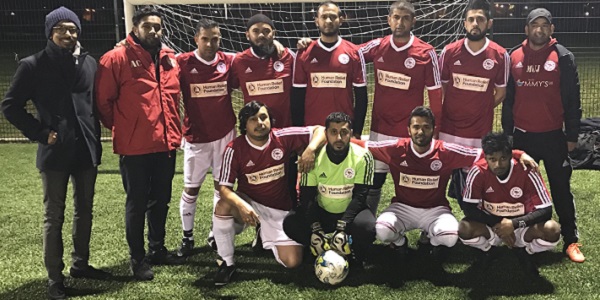 A kit clash saw Stepney forced to change into the yellow strip of fellow vets SYA. The Reds began the game on the offensive, and with less than a minute of play on the clock it was captain Zaheer Saleh who poked home the opener to set the tone for the rest of the game.

G7 are not a team designed to lie low, and instant pressure saw an equaliser after a lapse in concentration in the Stepney ranks six minutes later.

With the momentum swinging towards G7, Stepney absorbed a few minutes of sustained pressure – but a swift move on the break involving Mufi Uddin and Sham Zaman released Jamal Rahman to hammer home his first goal since signing for Stepney.

With half time approaching, Jamal bulldozed through the G7 rearguard to make it 4-1 at the break for Emdad Rahman’s team.

With Mams Uddin’s men attacking with intent after the interval, Stepney eased on the pedal. Centre back Shadu limped off and on came midfield schemer Tharik Hussain to add artistry to the midfield – an impressive body feint and shimmy sidestep almost resulted in an immediate goal.

In the next attack a driving run from Sham saw a threaded pass to Jamal, who despite suffering with heavy flu finished clinically to complete his hat trick.

With two minutes remaining on the clock Tharik released Mufi on the break, and the pacy left winger squared for centre back Russel Choudhury to apply the coup de grace on an impressive win. There were cheers for Choudhury who had squandered an open goal sitter a minute earlier.

Stepney player manager Emdad Rahman commented after the game, “A great win which displayed great versatility within the squad as several players were used in different positions. We only made the one forced change tonight and the boys were brilliant all round. Big thanks to Muhammed Nashir’s SYA for lending us their kit – hopefully they won’t smell much!”