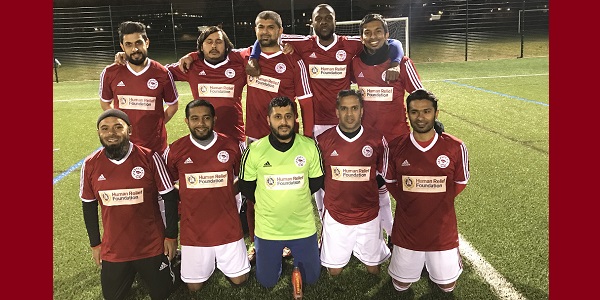 WITH A BREAK in play from the Inner London Premier League, Stepney FC navigated the group stages to reach the knockouts of the TVL Cup.

Stepney kicked off their Cup campaign with a 2-0 win over FC Bondu – with Harun Rashid scoring his first vets goal after excellent interlinking between Captain Zaheer Saleh and Mufi Uddin.

Stepney doubled the lead a few minutes later, after a long ball from Shane Baptiste fell to Russell Choudhury, who laid off for the energetic Sham Zaman to fire home. Tharik Hussain and Ruhul Alam came on as subs to ease Stepney home.

Abohani debutant Abdul Salik was man of the match as a stout defensive performance saw a 0-0 draw in the second game against Stepney. With Abohani and FC Bondu drawing their last group game, Stepney met Riverside in the final game assured of a place in the knockout stages.

Captain Zah scored the opener to take over from Mufi and Jamal Rahman as top scorer before being replaced by player manager Emdad Rahman who teamed up with Shane Baptiste to almost make it three for Stepney.

In between Ruhul took a pass from playmaker Tharik in the box, and a sharp swivel and strike saw Stepney home. The utility man has just returned after a lengthy injury lay off and put in flawless performances throughout the evening in a variety of positions. Stepney keeper Irfan Haji was generally untroubled through the evening.

Player manager Emdad Rahman said, “There were plenty of positives tonight with Harun Rashid scoring his first goal and being an effective outlet out wide. The energy of Shane Baptiste on the flanks was unmatched, while Zah continues to set the benchmark with his shooting boots. Ruhul came back to the fold and slipped effortlessly back into the line up, and that is testimony to the team as a whole. We look forward to the knockout stages.” 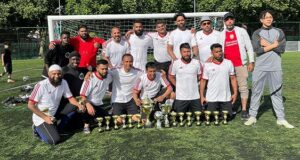