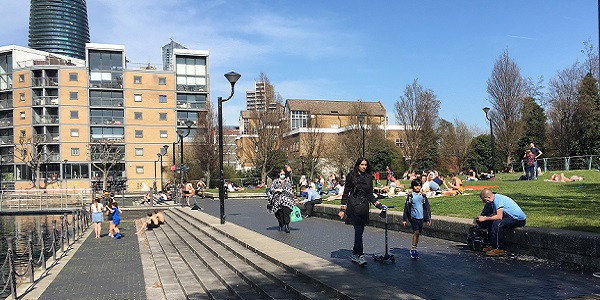 Public area on the east side of Millwall Outer Dock: residents picnic, but children on the steps have been "swimming".

Summer sun brings out good and bad on Island

THE SUN broke through the clouds on Tuesday, 30th March, as the school Easter holidays got underway – and hundreds of Tower Hamlets residents came out to celebrate the easing of lockdown restrictions.

Responsible and reckless behaviour were both on display at lunchtime, as people gathered on a small patch of grass beside the dockside walkway to the eastern end of the Millwall Outer Dock. Often pupils from a nearby school are brought out to this area at lunchtime, and it can become very crowded – but this week, with school pupils on holiday, residents and workers had the suntrap to themselves.

Most visitors were responsible, looking happy enough as they kept their social distance from other groups if not from people they were out with. However, some unaccompanied youngsters enjoyed themselves in a less responsible manner.

In the hot weather, it must have been great to go swimming – but, sadly, the docks are not the place for it.  In a swimming pool, the sides are the sides. In the Docks, what appears to be the edge above water may only be an overhand – and strong currents can drag you underneath, with no way to get out and with no air to breathe.

A couple of the young people – they must have been around ten or twelve years old – had brought their bikes and were riding them up and down the generous dockside path in a competent enough but less than expert manner. However, one of them was taking a lifebelt for a ride on his handlebars. Maybe he found it fun: but children brought up in the area usually respect the lifebelts because they are, literally, belts for life, for saving life in an emergency.

The area is not ready for the summer.  It is not clear who owns and manages it.  There were no signs up that were clearly reminding people of the dangers of swimming in the Dock. One or two of the lifebelts are missing in that area, there probably aren’t enough of them – and the ones there are do not have clear signs warning about the dangers of removing them.

Can someone take some action before we have a tragedy on our hands?