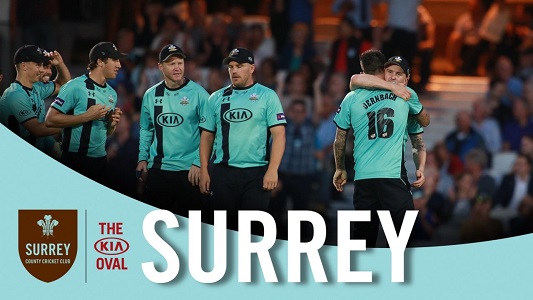 With a glorious hot summer’s evening and a sell out crowd, all that remained was a cracking cricket game to be played out. The boisterous crowd was not disappointed as Surrey beat Somerset by 15 runs at the sold out Friday night extravaganza at the Kia Oval.

Surefire Surrey bowling and a blistering start were the main foundations for the Surrey win, but there were jagged nerves at the end as Jade Dernbach and Tom Curran saw through a victory. 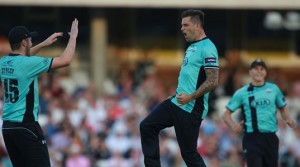 Aaron Finch delivered a superb knock of 51 from just 26 balls, including three huge sixes – one expertly caught by a fan in the Peter May Stand. For his troubles, the lucky gentleman took home £1,000 as a competition winner. Surrey reached 154/8 after 20 overs.

Surrey bowling throughout was superior. Johann Myburgh was dismissed by Jade Dernbach, with an excellent catch by Ben Foakes. Gareth Batty and Zafar Ansari bowled their four overs for a mere 20 runs, and as the pressure began to mount on Somerset they were unable to deal with Jade Dernbach and Tom Curran during a tense finale.

Jason Roy and Rory Burns of Surrey walk out on to the field of play during the NatWest T20 Blast match between Surrey and Hampshire at The Kia Oval on 9th June. (Photo by Charlie Crowhurst/Getty Images)

With four overs remaining, Somerset still had a good chance of snatching a win but were restricted to just 17 runs. Dernbach’s last over saw Tom Curran catch Lewis Gregory on the Peter May Stand boundary. The crowd went wild and Surrey are still in the race for a last eight spot.