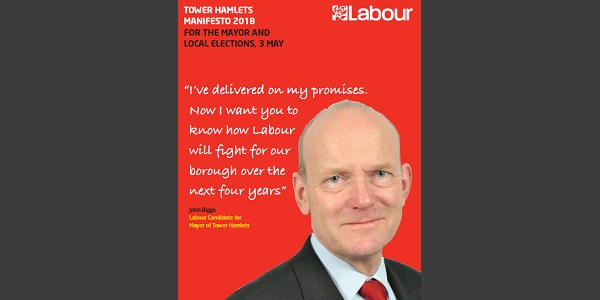 John Biggs, Labour's candidate for Mayor, on the front of the 2018 Labour manifesto

To close the month, we shall take a quick look at the Executive Mayor John Biggs himself. We’ve already written a great deal about how he has given Council officers the green light to change the employment contracts of Council workers – and, when agreement with the unions could not be reached, impose the contracts. We therefore went back over Labour’s 2018 manifesto, to see what it promised voters about the Council workforce. Sadly, there is little mention of Council staff in that lengthy document: just one comment on how things will be great for social workers (below). There are plenty of promises about how Labour will make Tower Hamlets better, but virtually nothing about how these promises are going to be delivered – who will do the work, and on what basis. Says it all, really, doesn’t it?

“[We] will make Tower Hamlets one of the best places in the country to be a social worker, attracting the very best professionals to keep our young people safe.”
Executive Mayor John Biggs, Labour’s 2018 Manifesto, pre-Tower Rewards

●To put your views on Tower Rewards to the Executive Mayor direct, contact him on:
mayor@towerhamlets.gov.uk