Don't Miss
Home / Featured / Trump: is he gearing up to attack Iran? 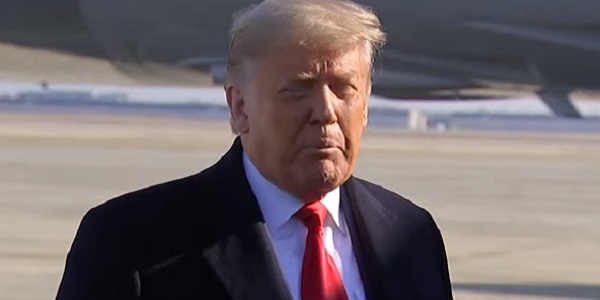 Trump: is he gearing up to attack Iran?

Deluded but dangerous to the end, Donald Trump is having one last go at destabilising the Middle East – and, therefore, the world – before he leaves office. This comes at a time when the world has never had a greater need to be united, as it fights the Covid pandemic.

As Trump headed off to look at the little bit of wall between Mexico and the US his Administration has been able to build over the last four years (this after promising to build a wall along the whole border), Mike Pompeo stepped into the limelight. Pompeo is seeing out his last week as US Secretary of State – in charge of Trump’s international policy.

Pompeo claimed that the US believed that al-Qaeda had a new headquarters in Iran – a claim that Iran instantly dismissed.  This may just be a last dig at Iran, but his words may have a more sinister meaning. There has been great concern in Washington that Trump may use his last week to launch a military attack. One of the brakes on such a move is the fact that an attack on, say, Iran would need to be endorsed by Congress – approval Congress would not give. However, Congress has already endorsed the US taking military action against al-Qaeda – and that endorsement is still live. Has Pompeo linked al-Qaeda and Iran in order to justify an attack on Iran, dressed up as an attack on al-Qaeda?

Time will tell whether this is Trump’s true intention and whether his Administration will deliver. However, the hint may bring more support to the Democrats’ moves to impeach Trump and to encourage Mike Pence to use his exceptional powers to remove Trump from the White House now.

Trump himself continues to lie about what is going on.  The mainstream press is now taking comfort from his election loss and many outlets are reporting that this Emperor has no clothes. Sadly, it may turn out to be too little, too late.  Trump is doing nothing new: he has been lying for more than four years.  He has a following, and it will take some genius moves from Biden to turn off the movement that Trump has started.

Here’s what Donald Trump said to reporters as he headed off to visit the bit of wall he’d had built. 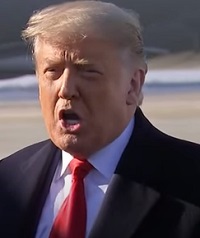 I think that Big Tech is doing a horrible thing for our country and to our country. And I believe it is going to be a catastrophic mistake for them. They’re dividing and divisive and they’re showing something that I have been predicting for a long time.
I’ve been predicting it for a long time and people didn’t act on it. But I think Big Tech has made a terrible mistake and very, very bad for our country. And that’s leading others to do the same thing. And it causes a lot of problems and a lot of danger. Big mistake: they shouldn’t be doing it.
But there’s always a counter-move when they do that.  I’ve never seen such anger as I see right now and that’s a terrible thing, terrible thing. And you have to always avoid violence.  And we have tremendous support. We have support probably like nobody’s ever seen before.  Always have to avoid violence.

Journalist:
What is your role in what happened at the Capitol?  What is your personal responsibility?

Trump:
So if you read my speech, and many people have got it and I’ve seen it both in the papers, in the media, on television. It’s been analysed and people thought that what I said was totally appropriate.
And if you look at what other people have said, politicians at a high level, about the riots during the summer, the horrible riots in Portland and Seattle and various other places – that was a real problem, what they said.
But they’ve analysed my speech and my words and my final paragraph, my final sentence.  And everybody […] thought it was totally appropriate.