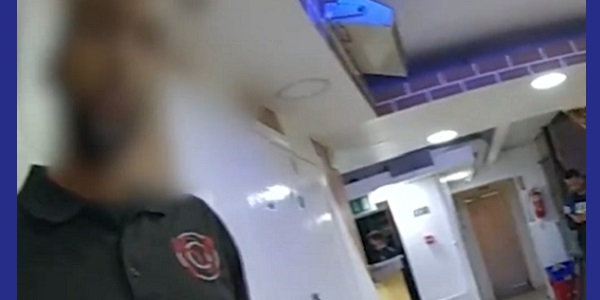 A man, presumably the restaurant owner, talks to police as they enter the premises.

WHO KNEW dominoes was such a popular game that it was being played in basements around Whitechapel?  Who knew it was so addictive that players could not resist breaking Tier 4 restrictions to have a game?

Whoever was in the know, it wasn’t the Metropolitan Police – who were as surprised as anyone else to find out about the latest craze. On 29th December, police officers were called out to a restaurant on Whitechapel Road, E1.  The identity of who called them has not been revealed.

The owner of the restaurant let the police in, telling them that the only people on the premises worked there. He seemed, in the view of the police, reluctant to let them in. However, in they went – and found 12 people in a dark room.  The police say that they believed that the people had gone there in order to play games – in particular, dominoes.

A gathering of this size broke the Tier 4 restrictions then in operation in London.  Accordingly, the “workers” were all issued with a Fixed Penalty Notice, and the police have asked Tower Hamlets Council to consider whether to fine the restaurant owner.

Chief Inspector Pete Shaw, from the Central East BCU said, “The rules under tier 4 are in place to keep all of us safe, and they do not exempt people from gathering to play games together in basements. The fact that these people hid from officers clearly shows they knew they were breaching the rules and have now been fined for their actions.”

The restaurant owner seems to be keeping quiet about what was going on. Was this really a new, underground Board Game movement?  Or is “dominoes” just a cover name? What do you think?

●Read more about it:
Girl saves friend as man attempts assault in Newham
Fourth man guilty of murder in Barking

2021-01-05
admin1
Previous: Can Royal London Hospital cope with Covid?
Next: MPF calls on Mosques to close to the public