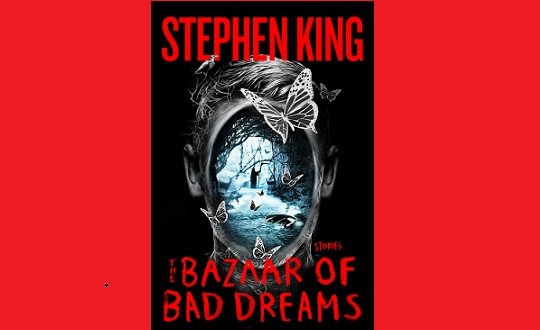 As Halloween approaches, there’s a rush of authors and playwrights and film-makers trying to provide a scary product to suit the season. Hodder and Stoughton, publishers of Stephen King’s new collection of short stories, The Bazaar Of Bad Dreams, commissioned some research to find out more about the love of being scared – and why being scared leads to real nightmares.

The survey also found that Londoners (77%) are more likely to have nightmares than residents in any other region. When asked to describe their most memorable nightmare, Londoners had dreamt about everything from dealing with giant bugs, aliens, dinosaurs and terrorists to being lost in endless tunnels in the underground.

What kind of people have nightmares? Top of the list are full-time students (83%); followed by the unemployed (76%); workers (66%); and then retired people (56%). Marital status is also a risk factor. Those never married are more likely to have nightmares (79%), with widows least likely at 57%.

The survey also sheds light into what we the most common nightmares are, and what those particular dreams might mean. The most common dream we have is of falling (47%), closely followed by dreams about being chased (46%) and being trapped (31%). Nightmares involving being naked in public and taking an exam were each only mentioned by 13% of the respondents. Other common dreams included teeth falling out (19%), dying (22%) and being lost (29%). Animals also figure in the dreams of the respondents, with dogs, gorillas, snakes and even hares appearing.

The Bazaar Of Bad Dreams, a new collection of short stories by Stephen King and published by Hodder and Stoughton, comes out in hardback on Tuesday, 3rd November.

Hodder & Stoughton is inviting the public to share their dreams to Stephen King’s social media channels for the chance to have them analysed by psychologist and dream expert, Ian Wallace and illustrated by BAFTA winning creative agency, Ralph.

2015-10-29
admin1
Previous: Celebrating the best of the British Bangladeshi community
Next: Creative funding for B&D