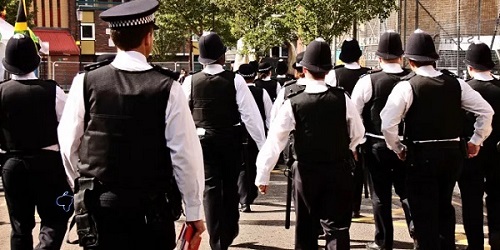 Dogs and guns seized in Chingford

A CAREFULLY co-ordinated raid on premises in Sewardstone Road, Chingford, last month saw dogs and puppies being seized – together with a firearm, combat knives and stolen plant machinery.

The operation, which was carried out to execute a search warrant, involved the Metropolitan Police Territorial Support Group (TSG), the Status Dogs Unit, the RSCA and further, unnamed, partners.

The dogs were taken to kennels so that they could be assessed to see whether they were prohibited breeds.  Three men – aged 28, 30 and 35 – were arrested at the cite on suspicion of dangerous dog offences, handling stolen good, possession of a firearm and offensive weapons in a private place. The three were released while police continue their investigations.

PC Tom Landels of the Metropolitan Police North East Command called the seizures “significant” and said, “The plant machinery will be returned to the lawful owners and the dogs will undergo assessment while they are cared for at a police kennel facility. Dog fighting is brutal, fundamentally cruel and is an organised crime that operates secretly with no regard for animal welfare.”

●Anyone who has any information about dangerous s dogs or dog fighting is urged to contact the police via 101.  Alternatively you can contact Crimestoppers on 0800-555 111 and give information anonymously.

●Read more about it:
Drugs and firearms found in Rainham
Men from Newham and Bow part of jailed gun gang

2022-03-23
admin1
Previous: Why is Russia at war with Ukraine?
Next: Swimmers gassed at Stratford Aquatics Centre